Some illustrations of bootstrapping

This post illustrates a statistical technique that becomes particularly useful when you want to calculate the sampling variation of some custom statistic when you start to dabble in mixed-effects models. This technique is called bootstrapping and I will first illustrate its use in constructing confidence intervals around a custom summary statistic. Then I’ll illustrate three bootstrapping approaches when constructing confidence intervals around a regression coefficient, and finally, I will show how bootstrapping can be used to compute p-values.

The goal of this post is not to argue that bootstrapping is superior to the traditional alternatives—in the examples discussed, they are pretty much on par—but merely to illustrate how it works. The main advantage of bootstrapping, as I understand it, is that it can be applied in situation where the traditional alternatives are not available, where you don’t understand how to use them or where their assumptions are questionable, but I think it’s instructive to see how its results compare to those of traditional approaches where both can readily be applied.

A confidence interval around an asymmetrically trimmed mean

The histogram below shows how well 159 participants performed on a L1 German vocabulary test (WST). While the distribution is clearly left-skewed, we still want to characterise its central tendency. Let’s say, for the sake of this example, that we decide to calculate the sample mean, but we want to disregard the lowest 10% of scores. For this sample, this yields a value of 32.7. 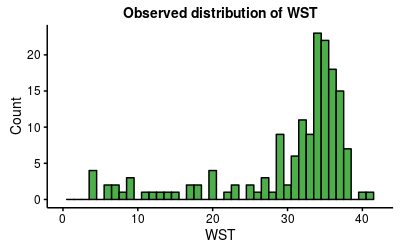 The distribution of 159 WST (German vocabulary test) scores. Disregarding the bottom 10% of this sample (16 values), its mean is 32.7.

Easy enough, but let’s say we want to express the sampling variation of this number (32.7) using an 80% confidence interval? Constructing confidence intervals around regular means can be done using the appropriate t-distribution, but we may not feel comfortable applying this approach to a mean based on the top 90% of the data only or we may not be sure how many degrees of freedom the t-distribution should have (158 or 142?). (In practice, this won’t make much of a difference, but verifying this would be reassuring.)

One possible solution is to proceed as follows. We take the sample that we actually observed (the green histogram below) and use it to create a new sample with the same number of observations (in this case: 159). We do this by taking a random observation from the original dataset, jotting down its value, putting it back in the dataset, sampling again etc., until we have the number of observations required (resampling with replacement). This new sample will be fairly similar in shape to our original sample, but won’t be identical to it (the purple histogram below): Some values will occur more often than in the original sample, others less often, and some may not occur at all in the new sample. We then compute the statistic of interest for the new sample (here: the mean after disregarding the lowest 10% of observations; the dashed red line) and jot down its value. We can do this, say, 1,000 times to see to what extent the trimmed means vary in the new, randomly created samples (blue histogram below). 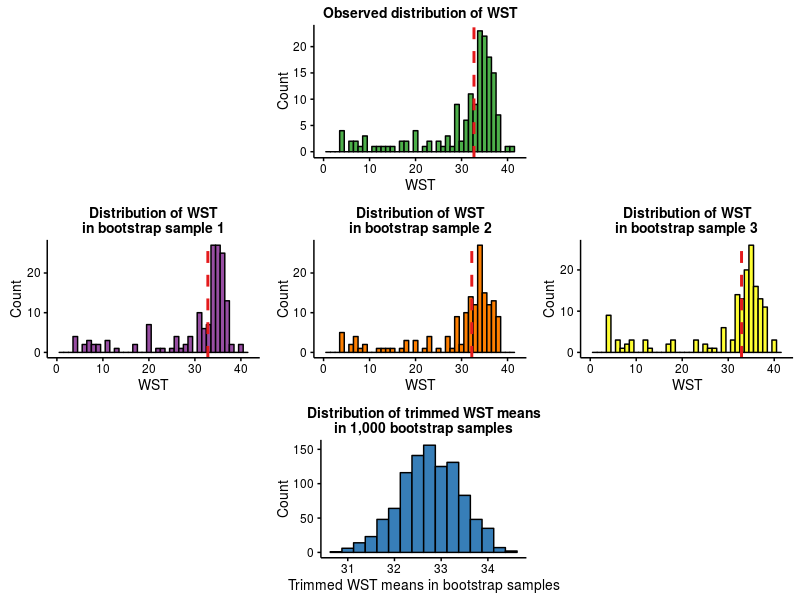 To construct a 80% confidence interval around the asymmetrically trimmed mean of 32.7, we can sort the values in the blue histogram from low to high and look up the values that demarcate the middle 80% (roughly 31.9 and 33.6).

The technique used above—generating new samples based on the observed data to assess how much a statistic varies in similar but different samples—is known as bootstrapping. It is particularly useful when you want to gauge the variability of a sample statistic

Perhaps you feel that it requires too big a leap of faith to use the sample we have as a stand-in for the population. After all, by chance, the sample we have may poorly reflect the population from which it was drawn. I think this is a reasonable concern, but rather than to alleviate it, I will just point out that analytical approaches operate on similar assumptions: t-values, for instance, use the sample standard deviations as stand-ins for the population standard deviations, and their use in smaller samples is predicated on the fiction that the samples were drawn from normal distributions. Assumptions, then, are needed to get a handle on inferential problems, whether you choose to solve them analytically, using bootstrapping or by another means.

A confidence interval for a regression coefficient: Non-parametric, parametric and semi-parametric bootstrapping

We have a dataset with 159 observations of four variables, whose intercorrelations are outlined below. The outcome variable is TotCorrect; the other three variables serve as predictors. 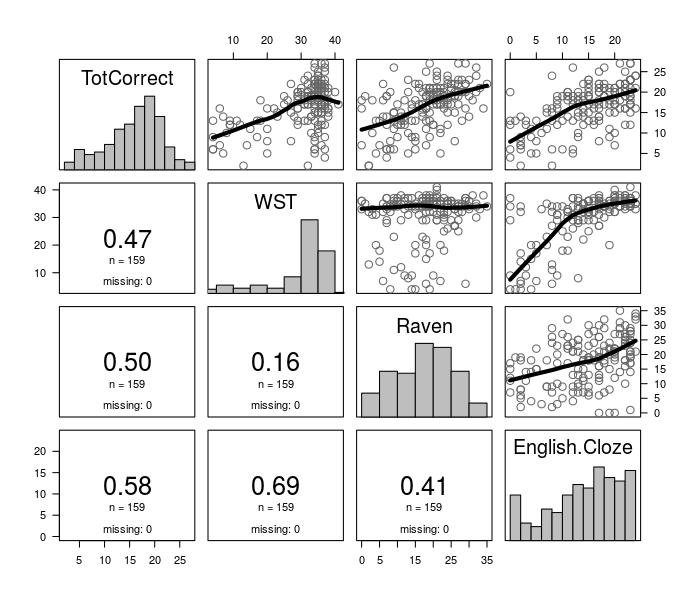 After standardising the three predictors, we fit a multiple regression model on these data, which yields the following estimated coefficients:

For the non-parametric bootstrap, we do essentially the same as in the previous example, but rather than computing the trimmed means for 1,000 new samples, we fit a regression model on them and jot down the estimated coefficient for z.WST.

(The results are shown further down.)

The regression model above is really just an equation:

where the random errors are assumed to be normally distributed around 0 with a standard deviation that is estimated from the data.

Instead of randomly resampling cases from the original dataset, we could use this regression equation to generate new outcome values. Due to the random error term, new simulated samples will differ from each other. We can then refit the regression model on the new values to see how much the estimated coefficients vary.

This approach is called parametric bootstrapping because it relies on the original model’s estimated regression coefficients (parameters), its error term estimate as well as the assumption that the errors are drawn from a normal distribution.

The histograms below show the sampling variability of the estimated z.WST coefficient according to each method. 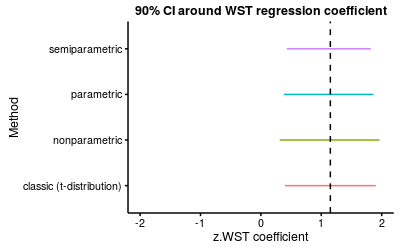 Another use for parametric and semi-parametric bootstrapping is to compute p-values if they can’t be computed analytically or if the assumptions of the analytical approach aren’t adequately met. The basic logic is the same in either case: You generate a large number of datasets in which you know the null hypothesis (e.g., ‘no difference’ or ‘the coefficient is 0’ or perhaps even ‘the difference/coefficient is 0.3’) to be true. You then compute whichever statistic you’re interested in for all of these new datasets and you calculate the proportion of cases where the statistic in the new datasets exceeds the statistic in your original sample. This proportion is a p-value as it expresses the (approximate) probability of observing a sample statistic of at least this magnitude if the null hypothesis is actually true.

For illustrative purposes, we’re going to compute the p-value for the estimated z.WST coefficient from the previous example using parametric and semi-parametric bootstrapping, although there are no reasons to suspect that the t-distribution-based p-value in the model output (0.012) is completely off. As such, we’d expect the three methods to yield similar results. For both the parametric and semi-parametric bootstraps, we need to generate datasets in which we know the null hypothesis to be true (i.e., the coefficient for z.WST = 0). This we do by first fitting a null model to the data, that is, a model that is similar to the full model we want to fit but without the z.WST term we want to compute the p-value for. Then we generate new datasets on the basis of this null model. This guarantees that the null hypothesis is actually true in all newly generated samples, so that the distribution of the estimated z.WST coefficients for the newly generated samples can serve as an approximation of the estimated z.WST coefficient’s distribution under the null hypothesis.

The steps for computing p-values using a parametric and semi-parametric bootstrap are pretty similar; the only real difference is whether we’re more comfortable assuming that the residuals are drawn from a normal distribution or that their distribution is similar to that of the null model’s residuals.

The distribution of the z.WST looks pretty similar whether we use parametric or semi-parametric bootstrapping.

The p-value obtained by parametric bootstrapping is 0.0142 (i.e., 142 out of 10,000 estimated z.WST coefficients have absolute values larger than 1.15), the one obtained by semi-parametric bootstrapping is 0.0124, whereas the t-distribution-based p-value was 0.012. As expected, then, there is hardly any difference between them. The bootstrapped p-values are themselves subject to random variation, and different runs of the bootstrap will produce slightly different results. We could increase the number of bootstrap runs for greater accuracy, but I don’t think this is really necessary here.

My goal was to illustrate how bootstrapping works rather than to discuss at length when to use which approach. Indeed, in the regression example above, the results of the bootstraps hardly differ from the t-distribution-based results, so the choice of method doesn’t really matter much.

That said, bootstrapping is a technique that’s useful to at least know about as it comes in handy if you want to estimate the sampling variation of a summary statistic in some funky distribution or if you want to verify, say, a likelihood ratio test for nested mixed-effects models.