What data patterns can lie behind a correlation coefficient?

The briefest of introductions to correlation coefficients

If you haven’t dealt with correlation coefficients much, a correlation coefficient, abbreviated as r, is a number between -1 and 1 that captures the strength of the linear relationship between two numeric variables. For instance, say you’ve asked 30 people about their weight and body height and plot these 30 (weight, height)-pairs in a scatterplot.

You’ll find plenty of examples below.

One correlation coefficient can represent any number of patterns

Correlation coefficients are popular among researchers because they allow them to summarise the relationship between two variables in a single number. However, a given correlation coefficient can represent any number of patterns between two variables, and without more information (ideally in the form of a scatterplot), the researchers themselves and their readers have no way of knowing which one.

First, source() the plot_r() function or download. Then, in R, you can draw scatterplots corresponding to a correlation coefficient of r = 0.5 and 50 observations like this. (You’ll end up with a different set of scatterplots as the scatterplots are created randomly.) 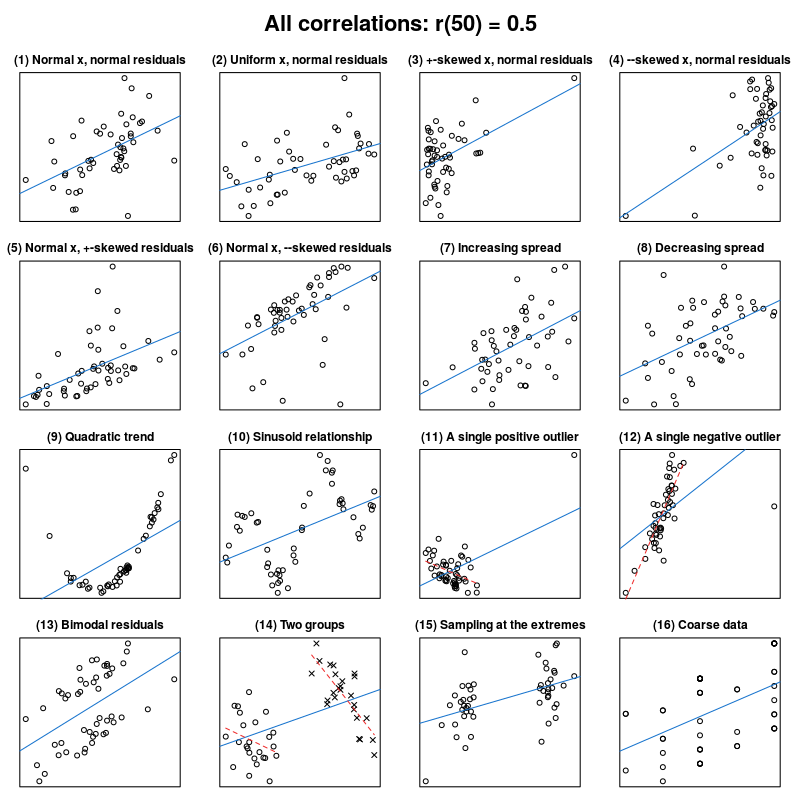 Plot (3) differs from (1) and (2) in that the X variable is now sampled from a skewed distribution. In this case, most X values are comparatively low but one X value is fairly large; if you run the code yourself, you may find that there are no outlying values or that there are more than one. Such a distribution may occur occur when X represents, for instance, participants’ performance on a task that was too difficult (floor effect). In such a case, one or a couple of outlying but genuine X values may (not will) have ‘high leverage’, that is, they may unduly affect the correlation coefficient by pulling it up or down.

The problem in (4) is similar to the one in (3), but now most X values are comparatively large and a handful are fairly low, perhaps because X represents participants’ performance on a task that was too easy (ceiling effects). Here, too, outlying points may have ‘high leverage’, i.e., they may unduly affect the correlation coefficient such that it doesn’t accurately characterise the bulk of the data.

Plots (5) and (6) are variations on the same theme as in plots (3) and (4): The Y values aren’t normally distributed about the regression line but are skewed. In such cases, too, some outlying but genuine Y values may (not will) have ‘high leverage’, i.e., they may pull the correlation coefficient up or down much more than ordinary data points.

Plots (7) and (8) are two examples where the variability of the Y values about the straight line increases and decreases, respectively, as X becomes larger, though admittedly, it isn’t very clear in this example. This is known as heteroskedasticity. The main problems with blindly relying on correlation coefficients in the presence of heteroskedasticity, in my view, are that (a) ‘r = 0.5’ both _under_sells how well Y can be estimated from X for low (high) X values and _over_sells how well Y can be estimated from X for high (low) X values, and (b) by just reporting the correlation coefficient you gloss over an important aspect of the data. Additionally, heteroskedasticity may affect your inferential statistics.

Plots (11) and (12) illustrate how a single outlying point, e.g., due to a technical error, can produce misleading correlation coefficients. In (11), a single outlying data point produces the significant positive correlation; had only the 49 data points on the left been considered, a negative relationship would’ve been observed (the dashed red line). Blindly going by r = 0.5 mischaracterises the bulk of the data. In (12), the relationship is considerably stronger than r = 0.5 suggests for the bulk of the data (the dashed red line); the outlier pulls the correlation coefficient down. Plots (11) and (12) differ from plots (3) and (4) in that in plots (3) and (4), the X values were all sampled from the same–but skewed–distribution and are, as such, genuine data points; in plots (11) and (12), the outliers were caused by a different mechanism from the other data points (e.g., a coding error or a technical glitch).

The situation in plot (14) is similar to but considerably worse than the one in (13): The dataset contains two groups, but unlike in (13), the overall trend captured by r = 0.5 betrays the fact that within each of these groups, the XY relationship is actually negative. Plot (14) will often, but not always, produce such a pattern, which is known as Simpson’s paradox. 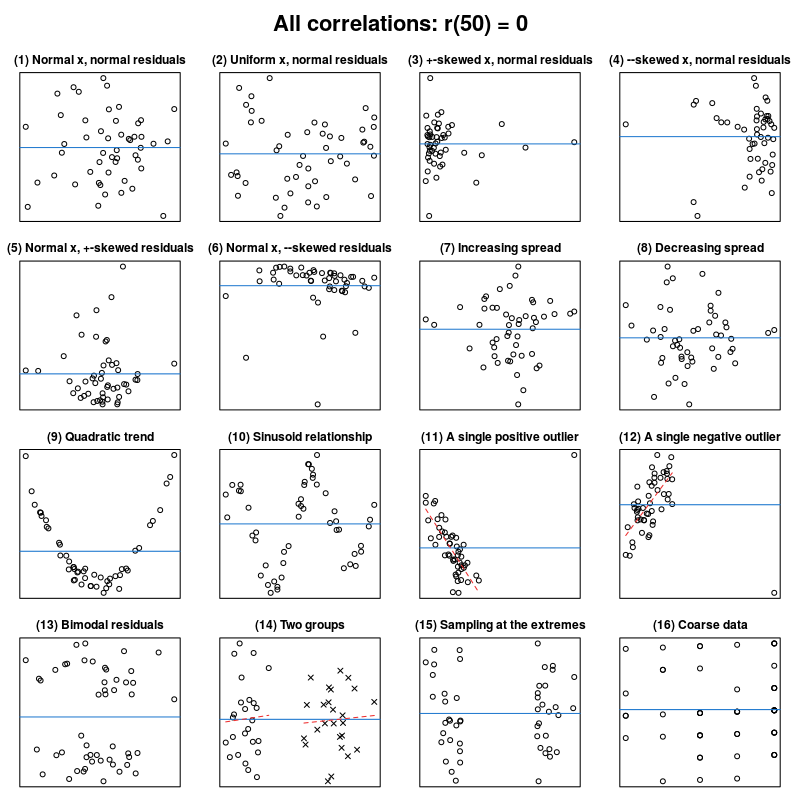 The main point I want to make here is that r = 0 doesn’t necessarily mean that there’s no XY relationship. This is clear from plots (9) and (10), which evince strong non-linear relationships. Plots (11) and (12) similarly underscore this point: There exists a strong relationship for the bulk of the data, but this trend is cancelled out by a single outlying data point. Occasionally, in plot (14), a trend present in two subgroups may not be visible in an aggregated analysis; this doesn’t seem to be the case in this example, though. 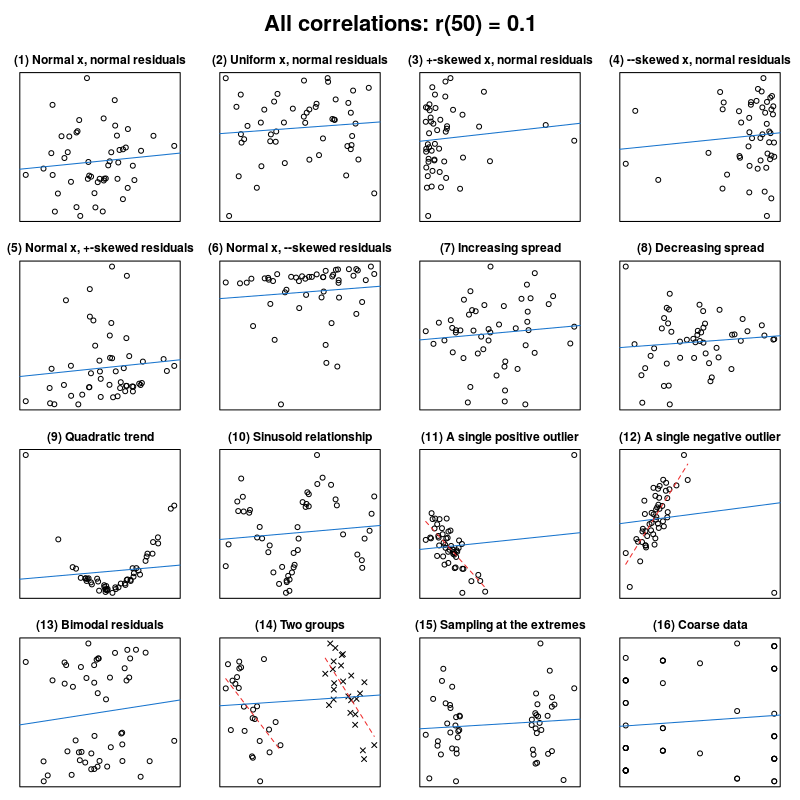 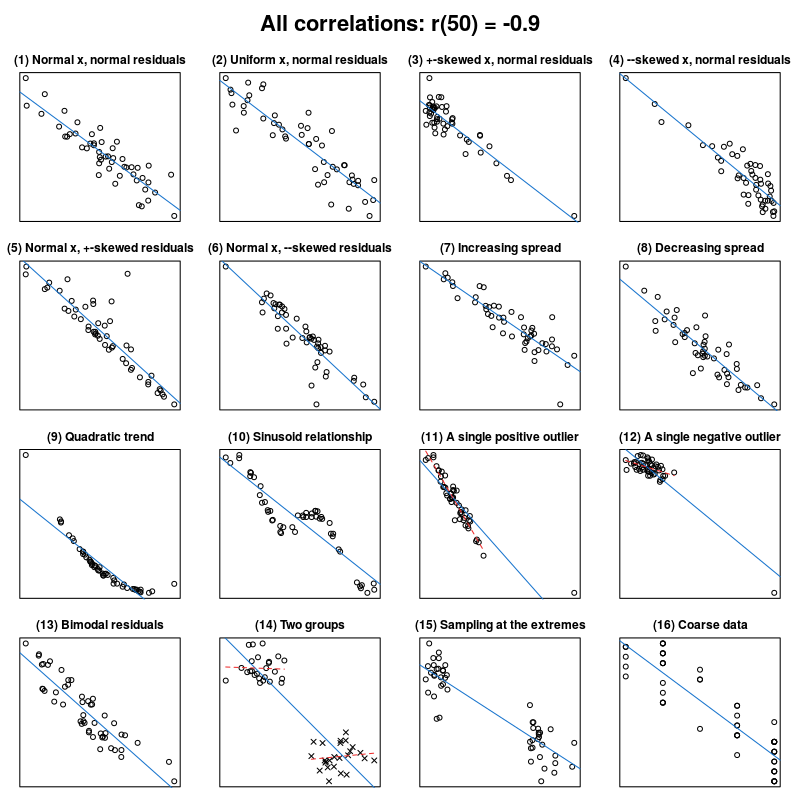 If you want to store the data underlying one or all of the plots, you can set the optional showdata parameter to either all or a number between 1 and 16 corresponding to one of the plots:

I hope the plot_r() function helps you to develop a feel for what correlation coefficients may actually represent and that this post may convince more researchers to draw scatterplots before running any correlation analyses—or regression analyses, for that matter—and to actually show them when reporting correlations.