The Data, Model, and Effect display subsections are identical to those in the previous post, so I left out the accompanying text. In the following subsections, I first show how you can easily add confidence bands to such effect displays and then explain how this method works under the hood.

For regression models fitted using R’s lm() function, confidence bands can easily be constructed using the predict() function we already used to calculate the outcome values for the predictor variables in the previous subsection. In addition to specifying the model and a data frame containing the combinations of predictor variables for which you want to generate predictions, you need to explicitly set the parameter interval to "confidence". If you don’t want to construct 95% confidence bands (the default), you can specify the desired confidence level using the level parameter. Below I set the desired confidence level to 90%, just to demonstrate the parameter’s use.

When used in this fashion, predict() generates a matrix with 3 columns. The first column contains the predictions themselves, i.e., what you’d get if you didn’t specify interval or level, whereas the second and third column contain the lower (lwr) and upper (upr) boundaries of the confidence intervals about the predictions. The code below adds these two latter columns to nd1_eng. 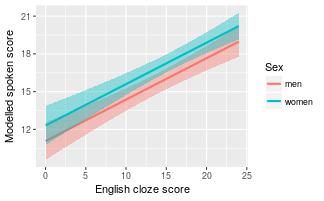 How does predict() construct confidence bands?

The main idea behind this approach is that you can compute the standard errors of the predicted values on the basis of (a) the combinations of predictor variables for which the predictions were computed and (b) the variance–covariance matrix of the estimated parameters of the model you fitted.

As for (a), we need to construct the model matrix for the data frame with the combinations of predictor variables (nd1_eng). The model matrix is just an array of numbers which, when multiplied with the estimated model coefficients, yields the model’s predictions. This matrix is very similar to the data frame with the predictor combinations itself, except that it contains an additional column containing 1’s (representing the intercept in the model) and one for which the n.Sex and c.Raven values have been multiplied (representing the interaction between these two predictors in the model). Since all c.Raven values in nd1_eng are set to 0, this column, too, only contains 0’s.

If you multiply this matrix by the estimated model coefficients, you get the predicted outcomes for these predictor combinations:

Multiply the standard errors by this t-value (1.65) and add or subtract the product from the predicted outcomes to get the confidence intervals about the predictions:

The confidence bands for the Raven-by-sex interaction is left as an exercise to the reader :)

Some miscellaneous points about confidence bands

We can similarly construct confidence bands for logistic regression models. See the previous post for details about the data and the model, which I’ll skip here.

Note that the predicted values are expressed in log-odds, not in probabilities (type = "link").

For generalised linear models, such as logistic regression models, predict() doesn’t return confidence intervals for predicted values, but it can return standard errors. We can use these to construct the confidence bands ourselves.

These standard errors are expressed in log-odds. To construct confidence intervals, we need to find the appropriate multiplier. For ordinary least-squares regression (cf. above), there is an exact solution to this problem, namely by referring to a t-distribution with the appropriate degrees of freedom. For logistic regression, we have to make do with an approximation based on the normal distribution.

Now multiply the standard errors by this multiplier and add/subtract them from the predicted outcomes:

This yields confidence intervals in log-odds. Probabilities are easier to interpret, though, so we run these through the logistic function to transform the log-odds to probabilities: 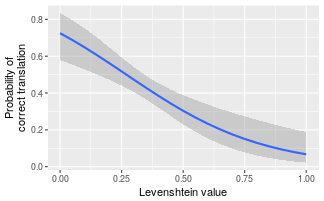 Once you get the hang of it, constructing confidence bands for the fixed effects in a mixed-effects model isn’t really that much more difficult than for the other models.

For details about the data, the model specification and the basic effect display, please refer to the previous blog post.

Note that this time, the predictions are generated in log-odds, not in probabilities (type = "link").

predict() doesn’t generate confidence intervals or standard errors for mixed-effects models, so we’ll have to compute them manually. The method is the same as for the ordinary least-squares model above; see http://glmm.wikidot.com/faq#predconf for a summary.

First, construct the model matrix for the combinations of predictor variables we generated the outcomes for.

Then extract the variance–covariance matrix of the model and use it to compute the standard errors for the predictions (in log-odds):

Now find the multiplier appropriate for 90% confidence intervals and carry out the same calculation as the previous two times:

Run the predicted values and their confidence bands through the logistic function to transform them to probabilities: 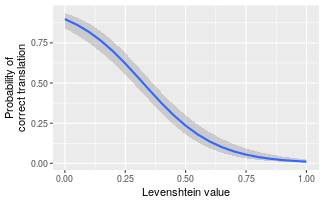 Note that this confidence band is based solely on the fixed-effects. As such, it should be taken to reflect the uncertainty about the average participant’s regression curve; the regression curves of individual participants can differ wildly from this average.

This post hardly makes for captivating reading, but I hope it helps some of you who want to visualise the uncertainty in their regression models.