The goal of this blog post is to share with you a simple R function that may help you to better communicate the extent to which two groups differ and overlap by computing common-language effect sizes.

What is the ‘common-language effect size’?

In 1992, McGraw and Wong introduced the common-language effect size, which they defined as

A couple of boxplots to show the spread and central tendencies: 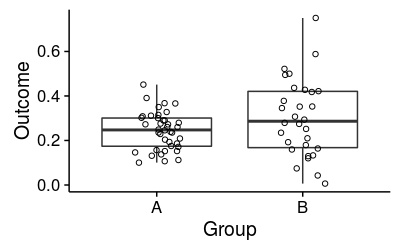 And the key summary statistics:

On the basis of the group means and standard deviations, McGraw and Wong’s common-language effect size can be computed as follows:

Strictly speaking, McGraw and Wong’s method assumes normally distributed, continuous data. While they point out that their measure is quite robust with respect to this assumption, you can use a brute-force method that doesn’t make this assumption to see if that yields different results.

Here’s how the cles.fnc() function works:

The results for both methods aren’t identical (38% vs. 40%), but they’re in the same ballpark. This is more often the case than not.

You can turn off the output by setting the parameter print to FALSE:

You can also extract information from the cles object if you want to pass it on to other functions:

An example with non-overlapping distributions

The code below generates a dataset with two non-overlapping groups. 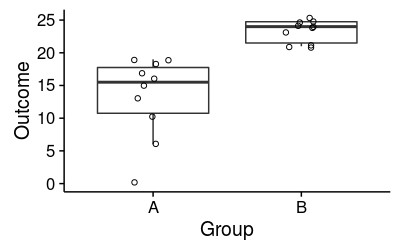 For use with more complex datasets

Let’s say you have data from a longitudinal study in which you collected data for Groups A and B at Times 1, 2 and 3, and you want to compare the groups at each time: 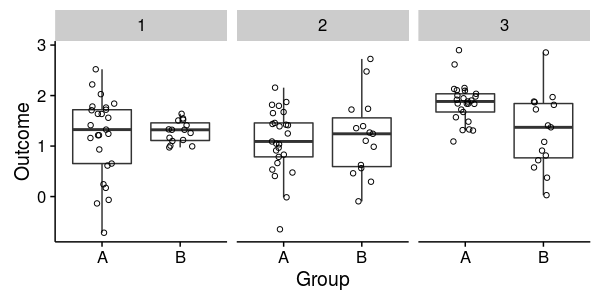 Using the by() function, you can run cles.fnc() separately for each Time. For more complex datasets, you can include more variables in the INDICES list.