Graphs are incredibly useful both for understanding your own data and for communicating your insights to your audience. This is why the next few blog posts will consist of tutorials on how to draw four kinds of graphs that I find most useful: scatterplots, linecharts, boxplots and some variations, and Cleveland dotplots. These tutorials are aimed primarily at the students in our MA programme. Today’s graph: the scatterplot. 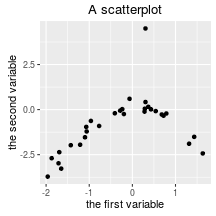 Plotting the data in this way often gives the reader – and yourself – a good idea of how the two measurements are related. We can immediately see what range both variables span and how differences in one variable are related to differences in the other one. In this case, the relationship between the two variable is distinctly non-linear, the direction of the relationship changing when the first variable is 0. Additionally, it’s immediately obvious that one pair of measurements stands out from the rest of the data and may need triple-checking.

Bottom line: Show your data – Any time you want to compute a correlation coefficient, draw a scatterplot first and show it to your audience.

Tutorial: Drawing a scatterplot in ggplot2

In this tutorial, you’ll learn how to draw a basic scatterplot and how you can tweak it. For this, we’ll make use of the free statistical program R and the add-on package ggplot2. ggplot2 is an extremely powerful tool for plotting data, and gaining familiarity with it through fairly simple examples will pay dividends if you’re ever going to work with more complex data.

I’m going to assume some familiarity with these programs. Specifically, I’ll assume that you know how to enter commands in RStudio and import datasets stored in the CSV file format. If you need help with this, see Chapter 1 of my introduction to statistics (in German) or Google importing data R.

In RStudio, read in the data. Setting encoding to "UTF-8" ensures that letters with diacritics (ä, ö, å etc.) are read in correctly.

If the summary looks like this, you’re ready to go.

Above, we read in the dataset as translations. The variables in this dataset that we want to plot are OrthographicDistance and ProportionCorrect. Since it stands to reason that the orthographic distance between a word and its translation equivalents affects how easily it can be understood, but not vice versa, we’ll put OrthographicDistance along the x-axis and ProportionCorrect along the y-axis.

In the ggplot function, we first specify which dataset contains the variables we want to display and then define the ‘aesthetics’ of the graph we want to draw, i.e., which variable we want to put on the x-axis and which one on the y-axis: 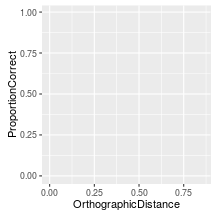 The plot above shows an empty coordinate system. The reason is that we haven’t told ggplot how we want to display the pairs of measurements. Usually, we plot them as dots or circles. To achieve this, we add another layer consisting of points to the coordinate system: 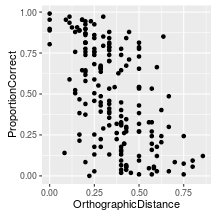 You can change the appearance of these dots, for instance by setting the shape parameter. For further examples, see the ggplot2 documentation. 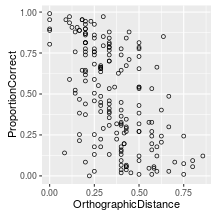 The main trend is clear from the graph above: words with a larger orthographic distance to their translation equivalents are translated correctly less often. (Nothing out of the ordinary, I’ll admit.) Graphs like these are great for learning about your own data, but they need some tweaking before you can use them in a presentation or term paper. Specifically, the default axis names aren’t usually very meaningful to other people, and even if they are, they look a bit slapdash. By specifying the xlab and ylab layers, you can give the axes more interpretable titles. The theme_bw layer get rid of the default grey background. 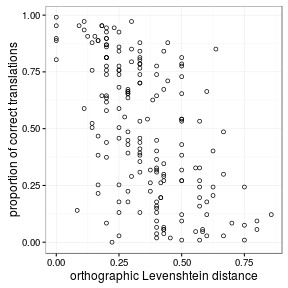 Labels instead of points

Instead of plotting points, we can plot the words that the points stand for. This makes it easier to identify data points that go against the grain – words with high orthographic distances that are easy to understand and vice versa. The words are stored in the Item column; to plot them, we need to add the label aesthetic to the ggplot call and specify that we want to plot text labels instead of points. 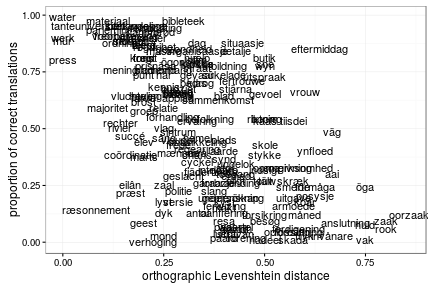 Words that are easy to understand despite their high orthographic distance (e.g., eftermiddag) or that are difficult to understand despite their low orthographic distance (e.g., ræsonnement) can now be identified. That said, with all the overlapping labels, the scatterplot looks crowded. We can make the font size a bit smaller, but with 181 labels, this plot is always going to look crowded. That said, this kind of plot would work well for smaller datasets. 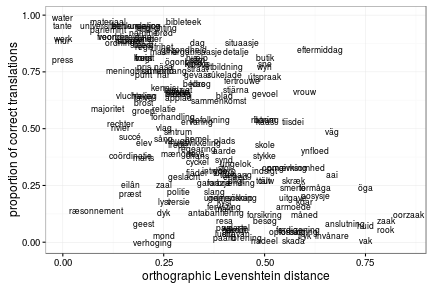 Instead of plotting labels for all words, we could just plot the labels of a handful of words and use dots for the rest: 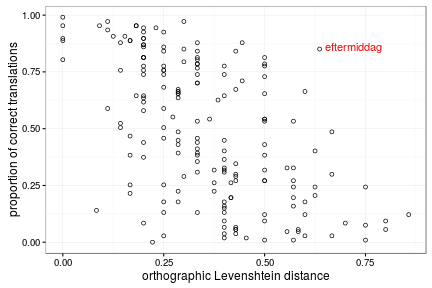 To highlight the trend in the data even more, you can add a trend line to the scatterplot. In ggplot2, this is a matter of adding another layer to the call (geom_smooth). If you put the geom_smooth after the geom_text layer, the trend line is plotted on top of the text labels; if you put it before geom_text, it’s plotted below the labels. 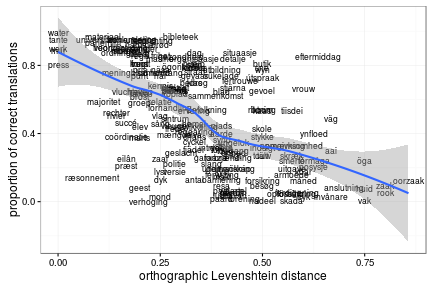 By default, the trend line is a non-linear one, is plotted in blue and is accompanied by a grey confidence band. This can all be modified, however. Below, I turn off the confidence band (se = FALSE) because it extents to proportions below 0 – which doesn’t make sense here. I also change the colour to red, just because. 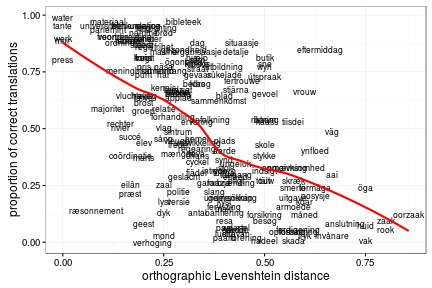 Or with labels instead of points, so that we can see which items cause the trend line for Danish to look so different from the other ones: 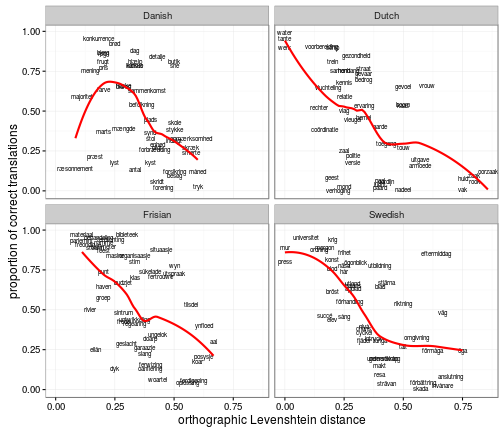 The ggplot2 online documentation is great, and you’ll find a wealth of information by googling keywords such as ggplot2 label points scatterplot.