Standardised effect sizes, by contrast, express these patterns by scaling the differences or trends by a measure of the variability within the sample. For instance, a 7-centimetre difference can be expressed as a difference of 0.6 standard deviations if the within-group standard deviation of body length is 12 centimetres (7/12 = 0.6). This standardised effect size measure is known as Cohen’s d. Similarly, 4-ms per year decrease in lexical decision times can correspond to a Pearson’s r of 0.27, of 0.05 and of 0.81 (among many other possibilities), depending on the variability in the participants’ ages and reaction times; Pearson’s r is a standardised effect size as well.

With that under our belts, here are the four reasons why I prefer unstandardised over standardised effect sizes.

Similarly, when assessing the bivariate relationship between two variables, raw effect sizes (e.g. regression coefficients) are often straigthforward to interpret. Personally, I find an effect size statement like ‘response latencies slowed down by 4 milliseconds a year’ more meaningful than ‘response latencies were positively correlated with age (Pearson’s r = 0.17)’. Sure, the Pearson correlation coefficient provides information as to how much of the response time variance is ‘accounted for’ by age (in this example: 0.17² = 3%), but this is as much an indication about the research design than about the effect being studied—which brings us seamlessly to Reason No. 2.

Reason No. 2: Standardised effect sizes are more sensitive to the research design (and that’s a bad thing)

Reducing within-group differences is one of the primary goals of good experimental design. For instance, better measurement instruments will yield a smaller within-group standard deviation since the amount of measurement error is reduced. Similarly, taking multiple measurements of each participants and averaging them will produce a smaller within-group standard deviation and hence a higher Cohen’s d. But the between-group difference itself, which is what we’re really interested in, won’t be (shouldn’t be) affected by such improvements in the experimental design. (The same holds for Pearson’s r.) In this case, higher standardised effect sizes reflect better design, not larger effects. Unstandardised effect sizes, by contrast, aren’t affected by such improvements in the experimental design, though their standard errors are, appropriately reflecting the higher degree of accuracy.

Standardised effect sizes aren’t only sensitive to differences in measurement error, but also to differences in the sampling strategy. By way of example, let’s say that we want to characterise the (linear) relationship between two variables. To do this, we have the choice between two strategies:

Does the difference in sampling strategy affect our estimate about the relationship between the two variables? I wrote a simulation with 10,000 runs to find out (R code). 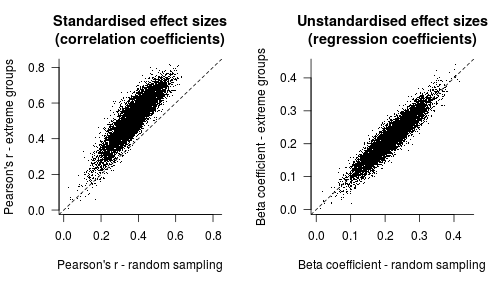 Non-random sampling doesn’t necessarily boost the standardised effect size: restricting the analysis to the participants who are in the top-30% with respect to Variable 1 decreases Pearson’s r (left panel) on average from 0.37 to 0.21. (This might sound pretty similar to restricting the analysis to university-educated participants…) But it doesn’t affect the regression coefficients (right panel; 0.22 for both approaches). (The dots don’t lie along the bisector due to the differences in sample size that aren’t compensated for by extreme group sampling, but the point is that there are about as many dots above the bisector as there are below.) 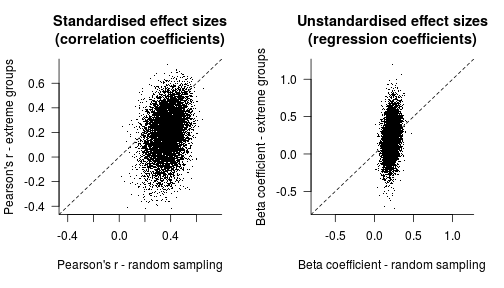 The upshot is that research design affects standardised effect sizes even if the effect itself doesn’t change: the relationships we sought to characterise were the same in all cases. But if we had based our conclusions on the relative effect sizes, we could’ve been tempted to try to explain ‘differences’ between results in terms of hidden interactions and the like. By looking at the unstandardised effect sizes, it becomes clear that there is no conflict between the findings in the first place.

(Note that I’m not arguing in favour of extreme-group approaches, though it’s a given that as psychologists or linguists, we rarely if ever can make use of random sampling.)

Reason No. 3: Apples and oranges

In his 1992 Power Primer, Jacob Cohen tentatively suggested that correlation coefficients of 0.10, 0.30 and 0.50 could be considered small, medium and large effect sizes, respectively. Cohen derived this yardstick from the distribution of effect sizes in the psychological literature up till then.

A useful complement to this article is Plonsky and Oswald’s recent review in Language Learning. In it, they analyse the distribution of effect sizes in second language research and recommend that correlation coefficients of 0.25, 0.40 and 0.60 be considered small, medium and large in L2 research. But what I found more interesting than the results they report is their speculation about ‘Domain maturity and changes over time’:

There is no reason to assume that effects in any particular domain would remain static over time. … A first scenario in which effect sizes might change over time involves a trajectory of research outcomes for a particular domain in which methodological adjustments or improvements lead to larger [standardised, JV] effect sizes over time … an alternate and somewhat opposite pattern of effects may also play out in a body of empirical literature characterized by theoretical developments and maturation taking place over time. Early research in a given area is often characterized by strong manipulations that set out to determine whether an effect exists and thereby determine whether the claims of a particular and usually novel hypothesis merit further attention. Such experiments would tend to yield larger effect sizes (…) Subsequently, after an effect is found, research efforts may shift to the generalizability of an effect across samples, settings, tasks, and so forth …

So when comparing a Pearson’s r of 0.5 with one of 0.2 and labelling the first ‘medium-strong’ and the latter ‘small’, what are we really comparing? Real effect size, methodological rigour, theoretical sophistication or the fact that there’s less low-hanging fruit as time goes on?

A related point is that these yardsticks have become (or tend to become) gospel, much like the sacred 0.05 significance threshold. I hope I’m mistaken in this, but my impression is that most researchers doing power analyses out there just plug in a ‘medium’ or ‘large’ Cohen’s d or Pearson’s r and jot down the minimum sample size that the software returns. Perhaps it’s more useful to think about how sources of extraneous variance can be brought under control in order to increase power (tighter design, more accurate measures, including covariates), rather than assuming that whatever yardstick out there also applies to one’s own study.

Reason No. 4: What about more complex models?

All discussions and tutorials on standardised effect sizes that I’ve come across assume that you have a comparatively easy statistical model: if you run a t-test, compute Cohen’s d; report η² if you run an ANOVA; report Pearson’s r if you have two continuous variables; report R² if you run a multiple regression model etc.

But these concepts translate poorly to the statistical tools that I need to make use of. For instance, there is no unambiguous counterpart of R² in logistic regression models nor in mixed-effect regressions. When I report on such models in research papers, I usually include a footnote to this effect in order to fend off the inevitable (and understandable) remark that effect sizes need to be reported. Up till now, this has done the trick for me, but Dale Barr (of mixed-effect model fame) seems to have had more difficulties in this department:

Tell them how to compute a dimensionless effect size measure for cross classified multilevel data, oh editor, or don't make it a requirement