When designing a study, you sometimes have a pool of candidate stimuli (words, sentences, texts, images etc.) that is too large to present to each participant in its entirety. If you want data for all or at least most stimuli, a possible solution is to split up the pool of stimuli into sets of overseeable size and assign each participant to one of the different sets. Ideally, you’d want the different sets to be as comparable as possible with respect to a number of relevant characteristics so that each participant is exposed to about the same diversity of stimuli during the task. For instance, when presenting individual words to participants, you may want for each participant to be confronted with a similar distribution of words in terms of their frequency, length, and number of adverbs. In this blog post I share some R code that I used to split up two types of stimuli into sets that are comparable with respect to one or several variables—in the hopes that you can easily adapt them for your own needs.

Fair warning: There’s lots of R code below, but it’s mainly a matter of copy-pasting the same lines and changing one or two things. If the R is poorly organised on your screen, you can copy-paste it into RStudio.

Creating sets that are identical with respect to one categorical variable

I have a list of 144 sentences that I want to use as stimuli in an experiment. I categorised these sentences into five different-sized plausibility categories myself. The categories themselves don’t matter here, but before running the experiment itself I want to make sure that my categorisation agrees with people’s intuitions about the plausibility of these sentences. To that end, I will run a validation study in which people rate their plausibility. The way the validation study is designed, it would take about half an hour to rate the plausibility of all 144 sentences. This isn’t that long, but when I can’t pay the participants, I prefer to keep the task’s duration at 10 minutes or so. To that end, I split up the pool of 144 sentences into 3 sets of 48 each. But rather than constructing these sets completely at random, I ensured that the plausibility categories (as I had defined them) were distributed identically in each set, so that each participant would be confronted with roughly the same variation in terms of the sentences’ plausibility. This is just a matter of randomly splitting up each of the categories into 3 sets, but the code below automises this.

First, you need a dataframe that lists the stimuli and their categories. Below, I just create this dataframe in R, but you can also read in a spreadsheet with the candidate stimuli.

The column Set now specifies which set each item was assigned to, and all sets have the same distribution of Category.

If the numbers of stimuli per category aren’t all divisible by the number of sets, some stimuli will remained unassigned. If you want to have data on all stimuli, you could randomly assign these remaining stimuli to the sets. The sets won’t be identically distributed with regard to the categories, but depending on what you want, it may be good enough.

For another study, we had 1,065 short texts for which we wanted to collect human lexical richness ratings. Some of the texts were narrative, others argumentative; some were written by bilingual children and others by children in a monolingual control group; and some were written when the children were 8, 9 or 10 years old. You can’t expect volunteers to rate 1,065 texts, so we decided to split them up into 20 sets of 53 texts each. (In reality, each set contained only 50 texts as we excluded a bunch of very short texts.) The sets were constructed so as to be maximally similar in terms of narrative vs. argumentative texts, texts written by bi- vs. monolingual children, and texts written by 8-, 9- and 10-year-olds. Below is the commented R code used to construct them.

First read in a dataframe containing the TextIDs and info regarding bi- vs. monolingual (ControlGroup), TextType and the children’s age (Time: 1, 2, 3). The dataframe for this example is available from http://homeweb.unifr.ch/VanhoveJ/Pub/Data/french_texts.csv.

Here’s how many texts there are for each combination of the three variables:

There are 2×2×3 = 12 combinations of these three variables. Create a new variable that specifies which of these combinations each text belongs to:

To divide up these texts evenly into 20 sets, we’ll need at least the following numbers of texts per combination per batch:

That is, we’ll need 5 FALSEarg1 texts, 3 TRUEarg2 texts etc. per set. These numbers add up to 48 in this case, which means that 20×48 = 960 out of 1,065 texts can be already be assigned by applying the code from the previous example. Below I only changed the name of the dataframe (stimuli became texts) and of the column containing the categories (Category became Combined).

Now each set contains 48 texts and all sets are identically distributed with regard to each combination of the three structural variables. This leaves 105 texts unassigned. For this project, it wasn’t so important that the distributions of the structural variables TextType, ControlGroup and Time were exactly identical in each set, just close enough.

In order to assign the remaining texts to sets, we loosened up the constraints slightly: to each set, we added as many texts as possible while ensuring that the joint distribution of ControlGroup and Time would be identical across the sets; we didn’t insist on equality in terms of TextType any more.

We can again copy-paste and slightly adapt the code above. I’ve commented all changes:

With 20×2 = 40 additional texts assigned, all sets now contain 50 stimuli and 65 texts remain unassigned. To assign as many of the remaining texts as possible, we can again loosen the constraints and only insist that all sets be identical in terms of their ControlGroup distribution (for instance). Apart from the first line, the code is the same as above:

Now each set contains 52 texts. The distribution of ControlGroup is the same in each set; the distributions of TextType and Time are similar but not identical across sets.

If you want, you randomly assign 20 of the remaining 25 texts to a set; 5 texts will remain unassigned if we insist on each set having the same number of texts:

This way, each set contains 53 texts:

While the sets aren’t with respect to the structural variables ControlGroup, TextType and Time, they are highly similar: 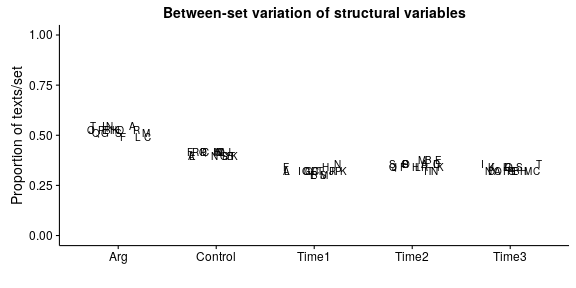 I haven’t dealt with numerical variables yet (e.g., constructing word sets that are similar in terms of their corpus frequency), but I think a reasonable way of going about it would be to bin the numerical variable (e.g., convert it to a variable with 10 categories) and apply the functions above. If too many stimuli remain unallocated, the remaining stimuli could be allocated using a wider bin size.

This was probably a bit messy with all the R code, but I hope some of you found it useful!