Analysing experiments with intact groups: the problem and an easy solution

To evaluate a new teaching method, a researcher arranges for one class of 20 students to be taught with the old method and another class of 20 students with the new method. According to a t-test, the students taught with the new method significantly outperform the control group at an end-of-year evaluation. The set-up of studies like these is pretty standard in applied linguistics – but it is fatally flawed. In this post, I explain the problem with comparing intact groups using traditional statistical tools and present a solution that’s easy to both understand and implement.

In a textbook experiment, the 40 students from the example above would have been assigned to one of the teaching methods randomly and on an individual basis. In the example above, however, the assignment to one of the teaching methods wasn’t done individually but class-by-class, so that all students in the same class were taught using the same method.

The difference may seem minute – after all, we end up with about 20 participants in either group, so who cares? However, assigning participants to experimental conditions class-by-class – in what is called a cluster-randomised experiment – leads to a problem known as clustering: Due to selection processes, a common background, having the same teachers, etc., two students in the same class tend to be somewhat more alike than two students from different classes. This, in turn, means that the information that each participant contributes to the study isn’t entirely new: if someone’s class-mates have above-average reading skills, chances are she too will have above-average reading skills, regardless of the teaching method. Rather than having 40 participants, the researcher in the example above could have the equivalent of, say, 8, 14 or 32 participants per group in terms of the information that the sample contains.

The degree of clustering is expressed in the intra-class correlation (ICC). This number takes a value between 0 and 1. An ICC of 1 means that all values within a cluster (e.g. a class) are identical to each other so that multiple observations per cluster don’t contribute any information to the study. An ICC of 0 means that values within a cluster are no more alike that values from different clusters. For reference, typical ICC values fall in the 0.15 to 0.20 bracket in educational contexts. 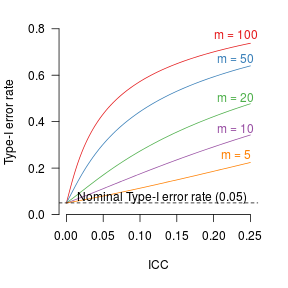 Figure 1: Spurious significance in cluster-randomised experiments analysed using traditional t-tests according to the intra-class correlation (ICC) and the number of participants per cluster (m). The number of clusters was fixed at 10, but the Type-I error rate differs only slightly for different numbers of clusters. Reading guide: If you carry out a cluster-randomised experiment with 10 classes of 20 (m, green line) students each and run an ordinary t-test on the resultant 200 data points, you have a 17% chance of observing a significant difference even if no real difference exists (for an intra-class correlation of 0.05) rather than the nominal 5% chance. Common ICC values in educational contexts are in the 0.15 to 0.20 bracket.

Clustered data are fairly common in applied linguistics and the language sciences at large, and often for good reason. For instance, it may not be feasible to randomly assign students to teaching methods on an individual basis, or doing so may jeopardise the ecological validity of the study. But regardless of whether a cluster-randomised experiment is well-motivated, the clustering it gives rise to needs to be taken into account in order to arrive at statistically valid results. Before discussing how this can be done, here are some examples of common clustered designs so that you may more easily identify clustered data when you stumbled across them:

In the last three cases, researchers may argue that no clustering is present in their data, but this argument would be extremely difficult to prove statistically. (It would involve showing that the between-cluster variance is zero.) Such an argument would be entirely rhetorical and would probably be quite easy to pick apart.

The fancy solution for dealing with the clustering problem is to analyse the data in a multilevel (i.e. mixed-effects) model. Multilevel models aren’t too easy to learn, though, and communicating their results to an audience that’s unfamiliar with them can be a challenge. There’s a conceptually straightforward and easy-to-implement alternative, however: average the measurements per cluster and run the t-test on the cluster averages instead. Doing so removes the dependencies in the data and produces nominal Type-I error rates.

To show how easy this is and how fundamentally it can affect the results, I’ll go through the process using simulated data for a cluster-randomised experiment that you can either download or read directly into R.

As you can see, this is a simple experiment with 80 participants per condition. Cross-tabulating the Condition and Class variables reveals that all students in a given class were assigned to the same experimental condition.

What if we were to ignore this clustering? A visual inspection of the distribution of the scores in each condition wouldn’t reveal anything out of the ordinary… 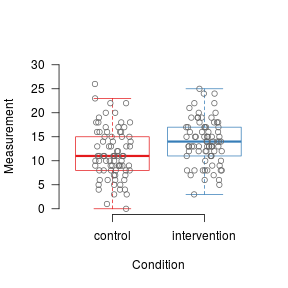 It’s only by plotting the scores per class that we get an idea of how the data are clustered. Class 3, a control class, consists of students who were pretty good at the task relative to the other control classes, for instance. (Incidentally, I set the ICC value to 0.1 when simulating this dataset.) 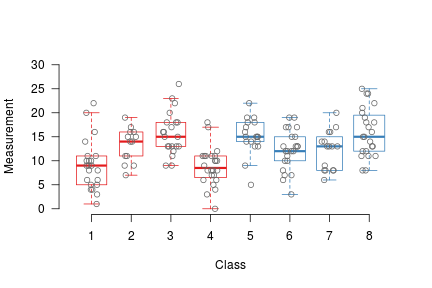 To take by-class clustering into account, we can compute the mean score per class. For this, I use the plyr package (use install.packages("plyr") to install):

These class means are then compared in a t-test:

This time, the test fails to show a significant difference (t(6) = 1.1, p = 0.31), and we’d be forced to conclude that we have no evidence that the intervention worked. (Which doesn’t mean that it didn’t, mind you.)

Further reading and some additional points

For further references and some additional points concerning cluster-randomised experiments, I refer to a recent article of mine (Section 4). Here’s the bullet-point version of what I think researchers should be aware of when planning or evaluating class-based experiments: