Every now and then, researchers want to compare the strength of a correlation between two samples or studies. Just establishing that one correlation is significant while the other isn’t doesn’t work – what needs to be established is whether the difference between the two correlations is significant. I wanted to know how much power a comparison between correlation coefficients has, so I wrote some simulation code to find out. 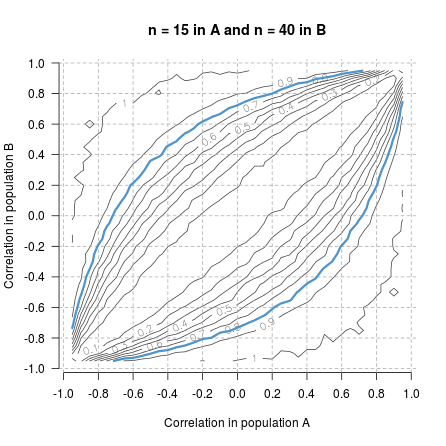 Not really any new insights, but a good opportunity to stress once again that The difference between “significant” and “not significant” is not itself statistically significant. And I got to play around with the outer and mapply functions, which are quite useful for avoiding for-loops in simulations (see below).

First load the MASS and psych packages (run install.packages(c("MASS", "psych")) if they aren’t installed yet).

Using the mvrnorm function from the MASS package, we can generate samples drawn from a bivariate normal distribution with a specific population correlation coefficient (the numbers of the antidiagonal in the Sigma parameter; in this example: 0.3). With cor we compute the sample correlation coefficients for these samples; these will differ from sample to sample.

With that out of the way, we now write a new function, compute.p, that generates two samples of sizes n1 and n2, respectively, from bivariate normal distributions with population correlations of popr12 and popr34, respectively.

Now we write another function, compute.power, that takes compute.p, runs it, say, 1000 times, and returns how many p-values lie below 0.05 – i.e., the comparison’s estimated power.

Using the outer function, I generate a grid featuring every possible combination of coefficients in corrs and run compute.power on each combination using mapply. Here, I estimate the power for a comparison with two samples of 20 observations.

With contour, the results matrix is then visualised: