This blog post is the sequel to the previous one, where I demonstrated how imperfectly measured control variables undercorrect for the actual confounding in observational studies (also see Berthele & Vanhove 2017; Brunner & Austin 2009; Westfall & Yarkoni 2016). A model that doesn’t account for measurement error on the confounding variable—and hence implicitly assumes that the confound was measured perfectly—may confidently conclude that the variable of actual interest is related to the outcome even when taking into account the confound. From such a finding, researchers typically infer that the variable of actual interest is causally related to the outcome even in absence of the confound. But once this measurement error is duly accounted for, you may find that the evidence for a causal link between the variable of interest and the outcome is more tenuous than originally believed.

Let’s first deal with a simulated dataset. The main advantage of analysing simulated data is that you check that what comes out of the model corresponds to what went into the data. In preparing this blog post, I was able to detect an arithmetic error in my model code in this way as one parameter was consistently underestimated. Had I applied the model immediately to the real data set, I wouldn’t have noticed anything wrong. But we’ll deal with real data afterwards.

The scenario we’re going to simulate is one in which you have two correlated predictor variables (A and B) and one outcome variable (Z). Unbeknownst to the analyst, Z is causally affected by A but not by B. Moreover, the three variables are measured with some degree of error, but we’ll come to that later. Figure 1 depicts the scenario for which we’re going to simulate data.

Figure 1. Graphical causal model for the simulated data. A set of unobserved factors $U$ gives rise to a correlation between A and B. Even though only A causally affects Z, an association between B and Z will be found unless A is controlled for.

Next, we need to generate the outcome. In this simulation, Z depends linearly on A but not on B (hence ‘$0 \times B_i$’).

The error term $\varepsilon$ is drawn from a normal distribution with standard deviation 1.3. Importantly, this error term does not express the measurement error on Z; it is the part of the true score variance in Z that isn’t related to either A or B:

Even though B isn’t causally related to Z, we find that B and Z are correlated thanks to B’s correlation to A. 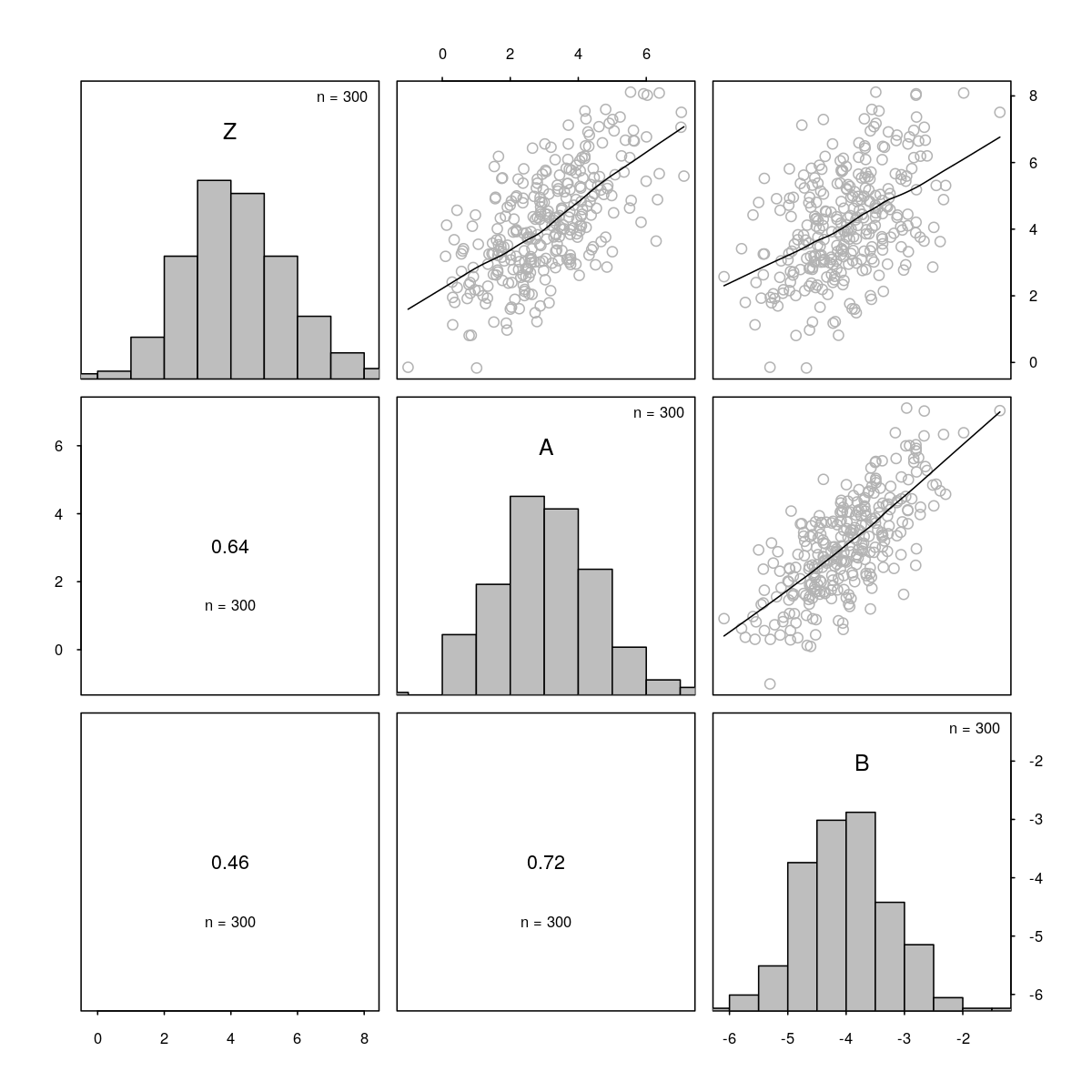 Figure 2. B is causally unrelated to Z, but these two variables are still correlated because B correlates with A and A and Z are causally related.

A multiple regression model is able to tease apart the effects of A and B on Z:

Now let’s add measurement error to all variables. The A values that we actually observe will then be distorted versions of the true A values:

The ‘noise’ $\varepsilon_{A}$ is commonly assumed to be normally distributed:

That said, you can easily imagine situations where the noise likely has a different distribution. For instance, when measurements are measured to the nearest integer (e.g., body weights in kilograms), the noise is likely uniformly distributed (e.g., a reported body weight of 66 kg means that the true body weight lies between 65.5 and 66.5 kg). 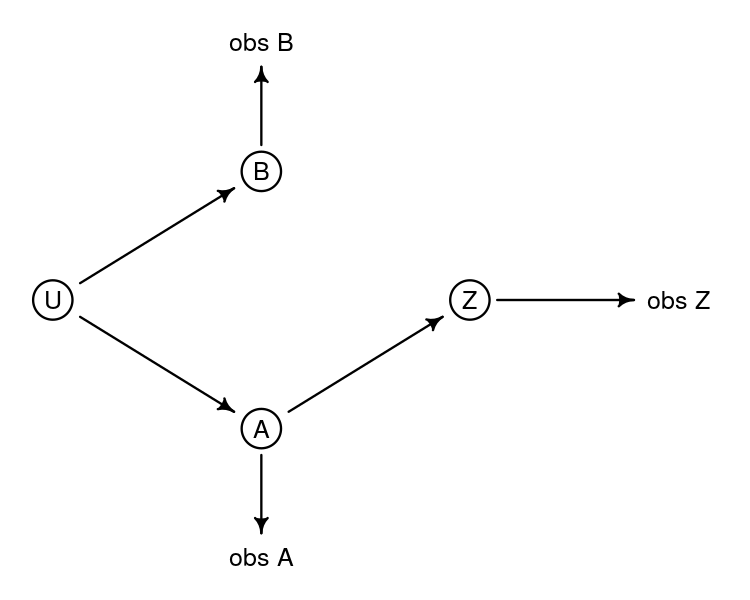 Figure 3. Graphical causal model for the simulated data. A, B and Z are now unobserved (latent) variables, but so-called ‘descendants’ of them were measured. These reflect their latent constructs imperfectly. Crucially, controlling for obs_A will not entirely control for the confound: the path between obs_B and obs_Z stays open.

As Figure 4 shows, the observed variables are all correlated with each other. 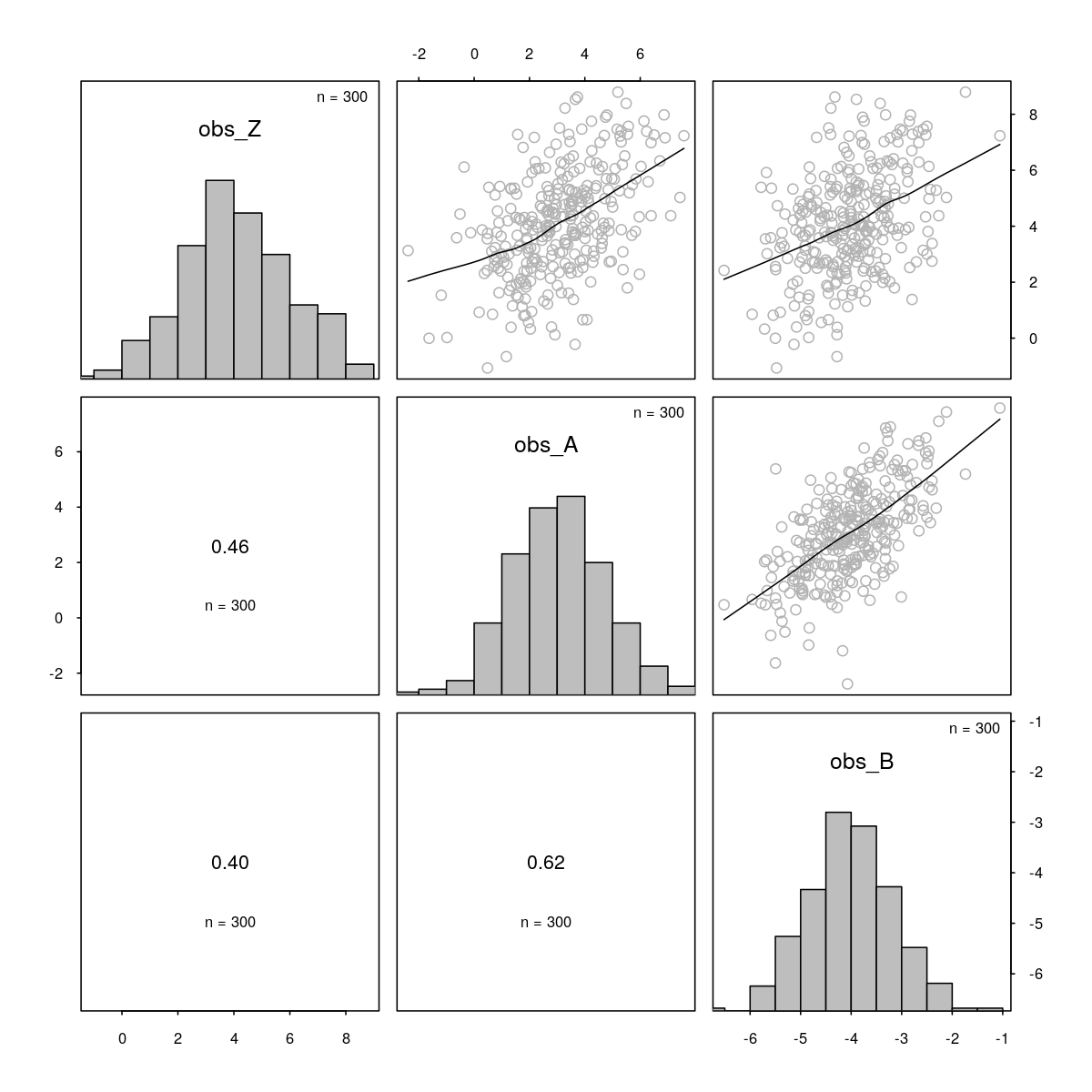 Crucially, controlling for obs_A in a regression model doesn’t entirely eradicate the confound and we find that obs_B is significantly related to obs_Z even after controlling for obs_A ($\widehat{\beta_{B_{\textrm{obs}}}} = 0.40 \pm 0.15$). Moreover, the regression model on the observed variables underestimates the strength of the relationship between the true construct scores ($\widehat{\beta_{A_{\textrm{obs}}}} = 0.40 \pm 0.07$, whereas $\beta_A = 0.7$).

The statistical model, written below in Stan code, corresponds to the data generating mechanism above and tries to infer its parameters from the observed data and some prior information.

The data block specifies the input that the model should handle. I think this is self-explanatory. Note that the latent variable scores A, B and Z aren’t part of the input as we wouldn’t have directly observed these.

The model block, finally, specifies how we think the observed data and the (transformed or untransformed) parameters fit together and what plausible a priori values for the (transformed or untransformed) parameters are. These prior distributions are pretty abstract in this example: we generated context-free data ourselves, so it’s not clear what motivates these priors. The real example to follow will hopefully make more sense in this respect. You’ll notice that I’ve also specified a prior for the reliabilities. The reason is that you typically don’t know the reliability of an observed variable with perfect precision but that you have sample estimate with some inherent uncertainty. The priors reflect this uncertainty. Again, this will become clearer in the real example to follow.

Put the data in a list and fit the model:

The model recovers the true parameter values pretty well (Table 1) and, on the basis of this model, you wouldn’t erroneously conclude that B is causally related to Z (see the parameter estimate for slope_B).

Table 1. Comparison of the true parameter values and their estimates. Parameters prefixed with ‘*’ are transformations of other parameters. The estimated reliability parameters aren’t really estimated from the data: they just reflect the prior distributions put on them.

Satisfied that our model can recover the actual parameter values in scenarios such as those depicted in Figure 3, we now turn to a real-life example of such a situation. The example was already described in the previous blog post; here I’ll just draw the causal model that assumes that reflects the null hypothesis that a child’s Portuguese skills at T2 (PT.T2) don’t contribute to their French skills at T3 (FR.T3), but that due to common factors such as intelligence, form on the day etc. ($U$), French skills and Portuguese skills at T2 are correlated across children. What is observed are test scores, not the children’s actual skills. 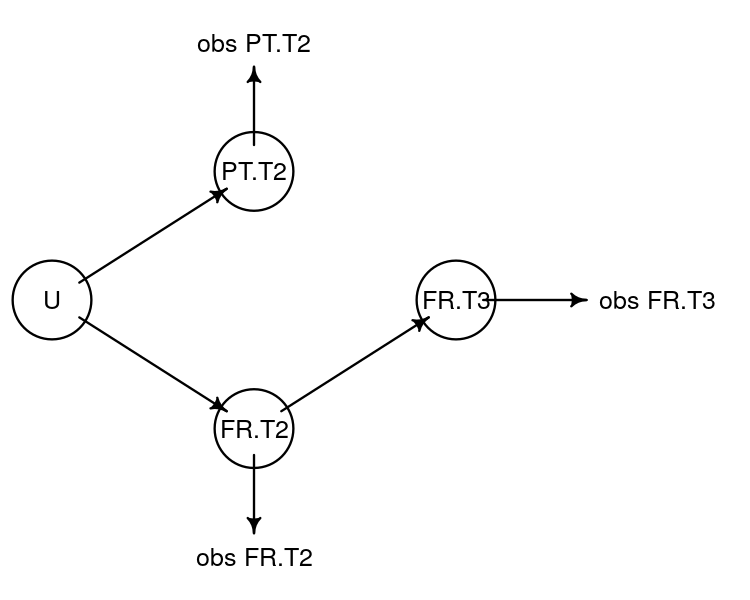 The command below is pig-ugly, but allows you to easily read in the data.

The only thing that’s changed in the statistical model compared to the example with the simulated data is that I’ve renamed the parameters and that the prior distributions are better motivated. Let’s consider each prior distribution in turn:

Unsurprisingly, the model confidently finds a link between French skills at T2 and at T3, even on the level of the unobserved true scores ($\widehat{\beta}_{\textrm{French}} = 0.71 \pm 0.16$). But more importantly, the evidence for an additional effect of Portuguese skills at T2 on French skills at T3 is flimsy ($\widehat{\beta}_{\textrm{Portuguese}} = 0.11 \pm 0.14$). The latent T2 variables are estimated to correlate strongly at $\widehat{\rho} = 0.81 \pm 0.08$. These results don’t change much when a flat prior on $\rho$ is specified (this can be accomplished by not specifying any prior at all for $\rho$).

Compared to the model in the previous blog post (Table 2), little has changed. The only appreciable difference is that the estimate for sigma is lower. The reason is that, unlike the previous model, the current model partitions the variance in the French T3 scores into true score variance and measurement error variance. In this model, sigma captures the true score variance that isn’t accounted for by T2 skills, whereas in the previous model, sigma captured the total variance that wasn’t accounted for by T2 skills. But other than that, the current model doesn’t represent a huge change from the previous one.

A couple of things still remain to be done. First, the French test at T3 was the same as the one at T2 so it’s likely that the measurement errors on both scores won’t be completely independent of one another. I’d like to find out how correlated measurement errors affect the parameter estimates. Second, I’d like to get started with prior and posterior predictive checks: the former to check if the priors give rise to largely possible data patterns, and the latter to check if the full model tends to generate data sets similar to the one actually observed.

Berthele, Raphael and Jan Vanhove. 2017. What would disprove interdependence? Lessons learned from a study on biliteracy in Portuguese heritage language speakers in Switzerland. International Journal of Bilingual Education and Bilingualism.

Brunner, Jerry and Peter C. Austin. 2009. Inflation of Type I error rate in multiple regression when independent variables are measured with error. Canadian Journal of Statistics 37(1). 33–46.

Westfall, Jacob and Tal Yarkoni. 2016. Statistically controlling for confounding constructs is harder than you think.. PLOS ONE 11(3). e0152719.