When you want to know if the difference between two conditions is larger in one group than in another, you’re interested in the interaction between ‘condition’ and ‘group’. Fitting interactions statistically is one thing, and I will assume in the following that you know how to do this. Interpreting statistical interactions, however, is another pair of shoes. In this post, I discuss why this is the case and how it pertains to interactions fitted in logistic regression models.

The crux of the problem was discussed from a psychologist’s perspective by Loftus (1978; see also Wagenmakers et al. 2012): Even if you find a statistical interaction between ‘condition’ and ‘group’, this doesn’t necessarily mean that one group is more sensitive to the difference in conditions than the other group. By the same token, even if you don’t find a statistical interaction between ‘condition’ and ‘group’, this doesn’t necessarily suggest that both groups are equally sensitive to the difference in conditions. The reason for this ambiguity is that the measured outcome variable (e.g., test score, reaction time, etc.) need not map linearly onto the latent variable of interest (e.g., proficiency, effort, etc.). For example, a 3-point increase on an arbitrary scale from one condition to another may correspond to a greater gain in actual proficiency on the higher end of the scale than on the lower end. If one group progresses from 7 to 10 points and the other from 15 to 18 points, then, the statistical analysis won’t reveal an interaction between ‘condition’ and ‘group’ in terms of the measured outcome variable, even though there is a greater gain in proficiency for the latter group than for the former. By the same token, a 4-point increase for the first group may correspond to a 3-point increase for the second group in terms of proficiency gained. If this doesn’t make much sense to you, I suggest you read the first seven pages of Wagenmakers et al. (2012).

Unfortunately, the problem with interpreting interactions doesn’t vanish if you don’t want to infer latent psychological variables and you stick strictly to observable quantities. For instance, if you want to compare the efficiency of two car makes (red vs. blue) depending on fuel type (petrol vs. diesel), you may not find an interaction between car make and fuel type when you express fuel efficiency in litres per 100 kilometres: There may be, say, a one-litre difference between both fuel types for both car makes (Figure 1, left). But if you express fuel consumption in miles per gallon (or kilometres per litre), you’d observe that the difference in distance travelled per amount of fuel consumed between diesel and petrol is larger for one car make than for the other (Figure 1, right). The reason is that, while both measures (litres/100 km and miles/gallon) are perfectly reasonable and use exactly the same information (distance travelled and fuel burnt), the mapping between them is nonlinear. 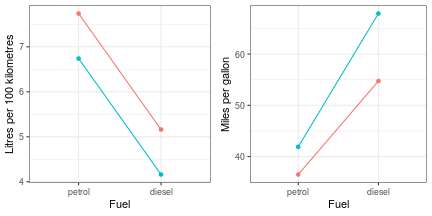 You encounter the same problem when you fit interactions in a logistic model. The coefficients in logistic models are estimated on the log-odds scale, but such models are more easily interpreted when the coefficients or its predictions are converted to odds (by exponentiating the log-odds) or to proportions (by applying the logistic function to predictions obtained in log-odds). Both the exponential and the logistic function are nonlinear, so that you end up with the same problem as above: Whether or not you observe an interaction may depend on how you express the outcome variable. 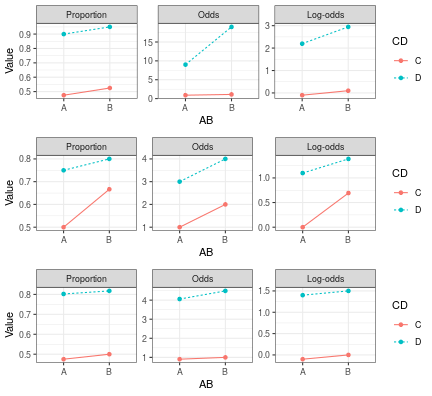 How to check for interactions in terms of proportions

At this point, you may be wondering how you can check whether a significant interaction in terms of log-odds in your own model corresponds to a significant interaction in terms of proportions, too. (If you aren’t, check out this random Garfield comic instead.) In the following, I show two ways how you can do this: using parametric bootstrapping and by going Bayesian.

We’ll work with a simple made-up dataset. The question is whether variables AB and CD interact with respect to the outcome variable Successes. For each combination of predictor variables, 1000 cases were observed, among which variable numbers of Successes:

0.004 is the estimated interaction effect when expressed on the proportion scale. Now we need to express our uncertainty about this number. Here I do this by means of a parametric bootstrap. If you’ve never heard of bootstrapping, you can read my blog post Some illustrations of bootstrapping. In a nutshell, we’re going to use the model to simulate new datasets, refit the model on those simulate datasets, and calculate the interaction effect according to these refitted models in the same way as we did above. This will yield a large number of estimated interaction effects (some larger than 0.004, others smaller) on the basis of which we can estimate how large our estimation error could be: 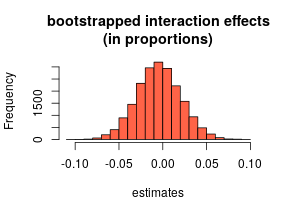 Figure 3. Distribution of the bootstrapped interaction effect in proportions. 95% of this distribution falls between -0.054 and 0.046.

The confidence interval about the number 0.004 can be obtained as follows:

So while the interaction effect is significant when expressed in log-odds, its uncertainty interval nicely straddles 0 when expressed in proportions. (Obviously, the example was contrived to yield this result.)

Alternatively, you can fit the data in a Bayesian model. I’ve used the brm() function from the brms package in a previous blog post, but its syntax should be fairly transparent. The only real difference (in terms of syntax) between brm() and glm() is in how you specify the outcome variable in a binomial logistic model. In this model (a Bayesian binomial logistic model with uninformative priors), too, the interaction effect is ‘significant’ (not a Bayesian term) when expressed in log-odds (0.47, 95% credible interval: [0.09, 0.86]). 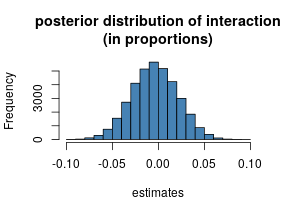 Figure 4. Posterior distribution of the interaction effect in proportions. 95% of this distribution falls between -0.053 and 0.046.

The credible interval about the number 0.004 can be obtained as follows:

The parametric and the bootstrap approach thus yield essentially the same results in this case.

Wagenmakers, Eric-Jan, Angelos-Miltiadis Krypotos, Amy H. Criss and Geoff Iverson. 2012. On the interpretation of removable interactions: A survey of the field 33 years after Loftus. Memory & Cognition 40(2). 145-160.