Inspired by Richard McElreath’s excellent book Statistical rethinking: A Bayesian course with examples in R and Stan, I’ve started dabbling in Bayesian statistics. In essence, Bayesian statistics is an approach to statistical inference in which the analyst specifies a generative model for the data (i.e., an equation that describes the factors they suspect gave rise to the data) as well as (possibly vague) relevant information or beliefs that are external to the data proper. This information or these beliefs are then adjusted in light of the data observed.

I’m hardly an expert in Bayesian statistics (or the more commonly encountered ‘orthodox’ or ‘frequentist’ statistics, for that matter), but I’d like to understand it better – not only conceptually, but also in terms of how the statistical model should be specified. While quite a few statisticians and methodologists tout Bayesian statistics for a variety of reasons, my interest is primarily piqued by the prospect of being able to tackle problems that would be impossible or at least awkward to tackle with the tools I’m pretty comfortable with at the moment.

In order to gain some familiarity with Bayesian statistics, I plan to set myself a couple of problems and track my efforts in solving them here in a Dear diary fashion. Perhaps someone else finds them useful, too.

The first problem that I’ll tackle is fitting a regression model in which the relationship between the predictor and the outcome may contain a breakpoint at one unknown predictor value. One domain in which such models are useful is in testing hypotheses that claim that the relationship between the age of onset of second language acquisition (AOA) and the level of ultimate attainment in that second language flattens after a certain age (typically puberty). It’s possible to fit frequentist breakpoint models, but estimating the breakpoint age is a bit cumbersome (see blog post Calibrating p-values in ‘flexible’ piecewise regression models). But in a Bayesian approach, it should be possible to estimate both the regression parameters as well as the breakpoint itself in the same model. That’s what I’ll try here.

Once you’ve installed RStan, fire up a new R session and run these commands.

I’ll analyse some real data in a minute. But I think it’s useful to analyse some data I know the true data generating mechanism of first in order to make sure that the model works as intended. The commands below generate data with properties comparable to the real data I’ll analyse in a bit.

The first graph below shows the mean outcome value (‘GJT’, i.e., L2 grammaticality judgement task result) depending on the age of onset of acquisition. As you can see, there’s a bend in the function at age 10. 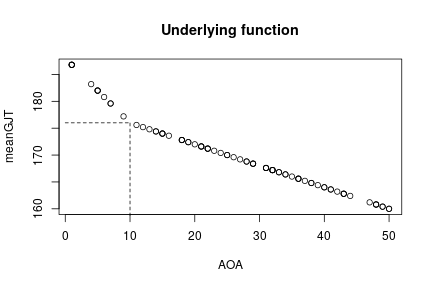 Figure 1. In the simulated data, the underlying relationship between AOA and GJT has a steeper slope for AOA values below 10 than for AOA values over 10.

In the second graph, some random normal error has been added to these mean values; it is the data in this figure that I’ll analyse first. 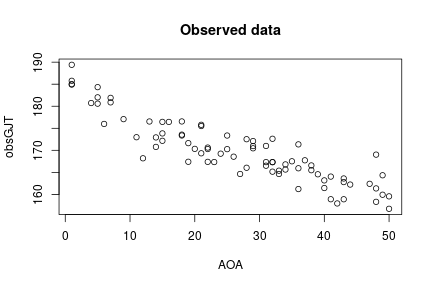 Figure 2. Interindividual differences obfuscate the nonlinear relationship and the true position of the breakpoint age somewhat.

While there exist some (truly excellent) front-end interfaces for fitting Bayesian models (e.g., brms), I’ll specify the model in RStan proper. This is considerably more involved than writing out a model using R’s lm() function, but this added complexity buys you something in terms of flexibility.

The model parameters you want to estimate. A breakpoint regression model has five parameters:

This is where you specify how the parameters and the data relate to each other. The assumed (and for the simulated data: correct) data generating mechanism is that the observed GJT values were drawn from a normal distribution whose mean depends on the participant’s AOA (see transformed parameters below) and the breakpoint and which has the same standard deviation everywhere.

You also have to provide so-called prior distributions for any parameters. These encode the information or beliefs you have about the parameters which you didn’t need the data for. I set the following priors:

This block specifies derivations of model parameters, be it because they’re the actual object of inference or just because it simplifies the notation. I specified two derived parameters.

Here you can specify some model outputs. I specified three such outputs:

To fit the model, first put the input data in a list. Then supply this list and the model code to the stan() function. The stan() function prints a lot of output to the console, which I didn’t reproduce here. Unless you receive genuine warnings or error (i.e., red text), everything’s fine.

A summary with the parameter estimates and their uncertainties can be generated using the print() function.

If the model is any good, data simulated from it should be pretty similar to the data actually observed. In the generated quantities block, I let the model output such simulated data (sim_GJT). Using the shinystan package, we can perform some ‘posterior predictive checks’:

You can also take this a step further and check whether the model is able to generate scatterplots similar to the one in Figure 2. If the following doesn’t make any immediate sense, please refer to the blog post Checking model assumptions without getting paranoid, because the logic is pretty similar.

First extract some vectors of simulated data from the model output:

Then plot both the observed vectors and the simulated vectors: 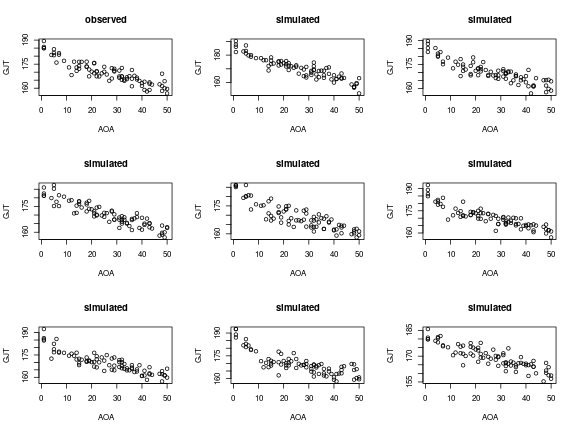 The simulated data look pretty much identical to the observed data, again demonstrating that the model is doing a pretty good job of learning the patterns in the data. This isn’t surprising, since I knew how the data were generated and constructed the model correspondingly. But it’s reassuring.

(Incidentally, I’m sure it’s possible to generate lineups more similar to the ones in that previous blog post, but this blog post is long as it is already.)

To visualise the model, you can draw an effect plot showing the average estimated relationship between AOA and GJT as well as the uncertainty about this relationship. To this end, I had the model output vectors of the fitted conditional means for AOAs 1 through 50 (sim_conditional_mean). With the commands below, I extract these vectors and then compute their mean values as well as some percentiles at each AOA. 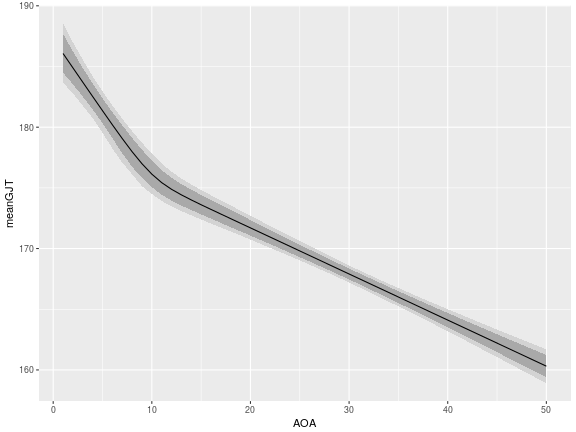 Figure 4. The modelled relationship between AOA and GJT for the made-up data with 80% and 95% credibility regions. The bend around AOA = 10 is noticeable but it smoothed out due to the uncertainty about the precise position of the breakpoint.

And now for real

Let’s now analyse some real data using the same model. These data stem from a study by DeKeyser et al. (2010). 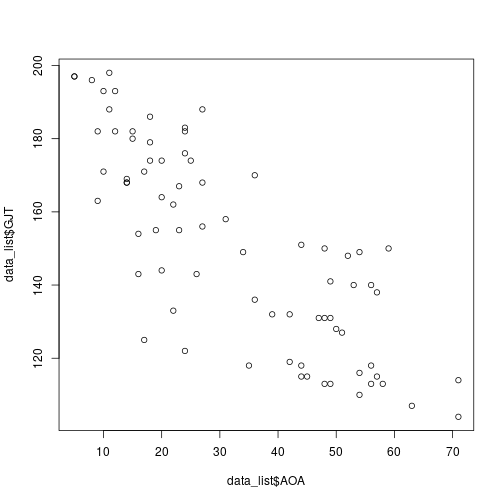 We ought to perform some posterior predictive checks to make sure the model makes sense, though: 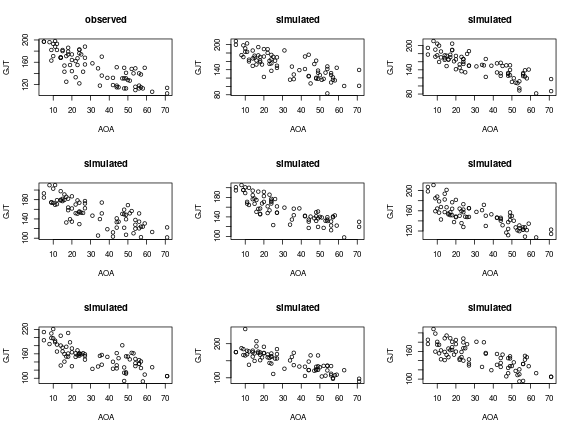 Figure 6. The actual input data (top left) and eight simulated datasets. Some patterns in the simulated data couldn’t have occurred in the actual dataset: the maximum possible GJT result was 204, yet a couple of datasets contain values above that. This is something that may be worth taking into account in a more refined model, but baby steps.

Figure 6 suggests that it may be possible to improve the model since the simulated data display some patterns that would have been impossible to observe in the actual study (viz., GJT values larger than 204). But this should suffice for now.

As a final step, we can draw an effect plot as before: 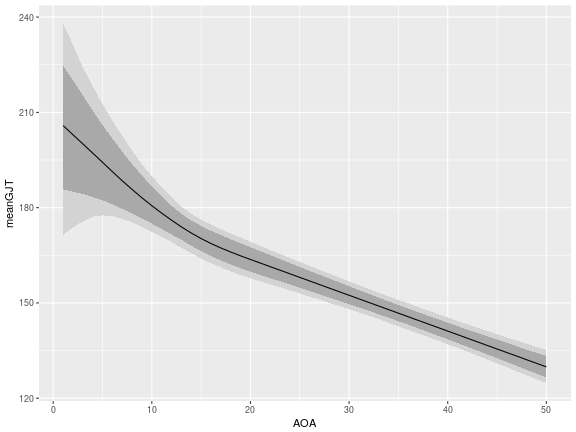 Figure 7. Effect plot for the piecewise regression model applied to DeKeyser et al.’s (2010) North America data. There is substantial uncertainty about whether the regression line should indeed contain a breakpoint.

Given the uncertainty about the position of the breakpoint and what happens to the regression line at that breakpoint, it would make sense to fit a linear regression model to these data and then estimate how much allowing for a breakpoint actually buys us in terms of fit to the data. This is why I had the model generate log_lik values, too, but I’ll discuss those another time.