To keep things easy, I will use a simulated dataset with two continuous predictors (pred1 and pred2) and one continuous outcome. The dataset is available here.

First, let’s draw some quick graphs to get a sense of how the predictors and the outcome are related.

When we suspect there’s an interaction between two predictors, it’s useful to draw conditioning plots as well. For these plots, the dataset is split up into a number of overlapping equal-sized regions defined by a conditioning variable, and the relationship between the predictor of interest and the outcome within each region is plotted. 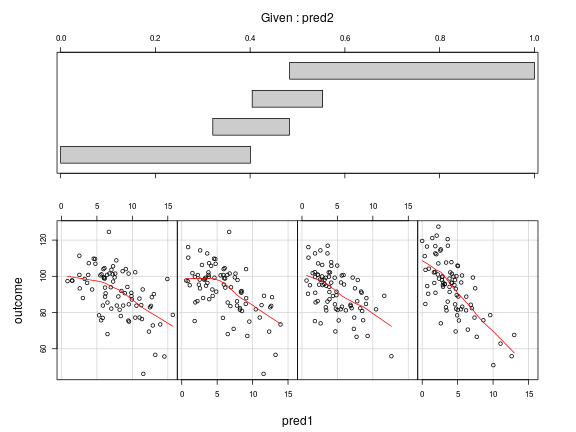 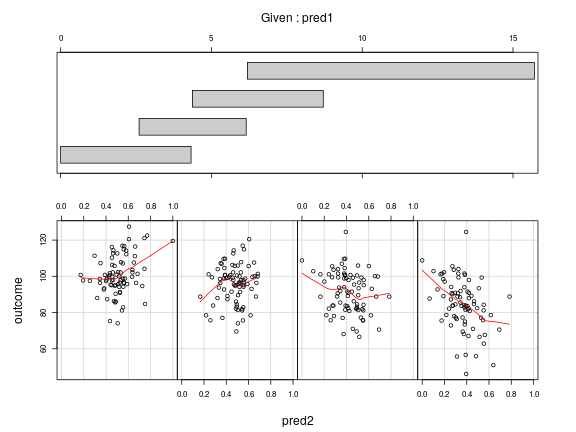 A numerical summary of the model can be obtained using summary(), but as you can see, this doesn’t offer much in the way of interpretable results.

To understand what the wiggly regression surface looks like, you need to plot it. This can be done using the vis.gam() function. The two plots below show the same regression surface: once as a three-dimensional plot and once as a contour plot. The latter can be read like a topographic map of hilly terrain: the contour lines connect points on the surface with the same height, and the closer the contour lines are to each other, the steeper the surface is. 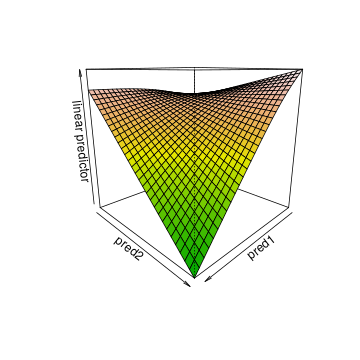 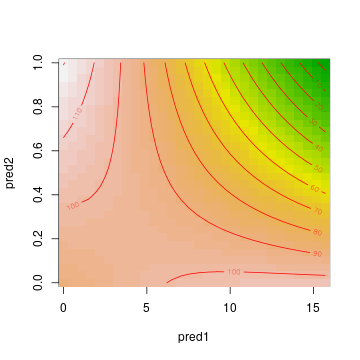 Then plot both contour plots alongside each other. Here I also set the too.far parameter. This way, region of the graph for which no combinations of predictor variables are available are not plotted. 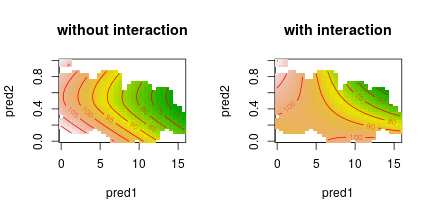 Decomposing a regression surface into main effects and an interaction

The wiggly regression surface of m1 has here been decomposed into the main effects of pred1 and pred2 and an interaction between them. Both main effects and the interaction are significant.

The edf values in the table above, incidentally, express how nonlinear the effects are estimated to be. Values close to 1 indicate that the effect is linear, whereas a value of 2 suggests that the effect can be modelled using a linear and a quadratic term etc. Here both main effects could sensibly be modelled linearly, but the interaction couldn’t. (A linear interaction means that you multiply both predictors together and use this product as an additional predictor.)

There’s much more to fitting nonlinearities and interactions using gam() than discussed here, but hopefully this was useful enough to dissuade you from carving up continuous variables when you’re interested in their interaction.