Covariate adjustment in logistic regression — and some counterintuitive findings

Including sensible covariates is a good idea when analysing continuous experimental data, but when I learnt that its benefits may not carry entirely carry over to the analysis of binary data, I wasn’t sure that I’d fully understood the implications. This post summarises the results of some simulations that I ran to learn more about the usefulness of covariates when analysing binary experimental data.

My previous discussions of the usefulness of including covariates when analysing randomised experiments (here and here) dealt with the case in which the dependent variable is continuous and could be analysed in a linear regression model. In a nutshell, including sensible covariates in such an analysis increases precision and power and does not bias the estimates of the treatment effect.

I mostly deal with binary dependent variables (e.g. presence v. absence or correct v. incorrect), however, which can be analysed in logistic regression models. According to Robinson and Jewell (1991), the benefits of covariate adjustment in linear regression don’t fully apply to logistic regression models. I wasn’t sure whether I had fully understood their take-home points (reading math-heavy papers means reading selectively for me), though. As I am currently planning a number of randomised experiments with binary outcome variables, I’d like to know whether it’d be useful to extract a number of additional variables that are known to related to this outcome but that aren’t of primary interest to me. To this end, I ran a couple of simulations that probe the effects of covariate adjustment in logistic regressions on the effect size estimate, its standard error and the statistical power for finding a treatment effect. I typically analyse my data using logistic mixed-effects models (see Jaeger 2008), but as a first step, I investigated the effects of covariate adjustment in ‘normal’ logistic regression models, i.e. models without random intercepts and random slopes.

The set-up of the simulation is based on the one reported in my first blog post. The narrative is as follows. Eighty German-speaking participants (the number of participants can be adjusted using the n parameter in the simulation) are randomly assigned to two equal-sized groups. Half of the participants are told something about Dutch grapheme-to-phoneme correspondences (say that Dutch

However, the participants differ in their knowledge of English, which may also affect their translation accuracy. Would it be worth the effort to give the participants an English-language test in order to be able to take this covariate (English skills) into account during the analysis, even though we’re not really interested in this variable?

I assumed that the accuracy variable (correct vs. incorrect) was generated from a binomial distribution. The probability of a correct translation was specified as:

For the simulation, the covariate (English test performance) is specified to be uniformly distributed between -1 and 1, whereas the parameters b.condition, b.covariate and sd.lat are systematically varied. For each combination of parameters, 10.000 datasets were generated that were analysed in two logistic models: one without and one with the covariate. From each model, I culled the estimate of the treatment effect and its standard error. Additionally, the p-value for the treatment effect in each model was computed twice: once based on Wald’s z-test and once based on the χ² test in a (sequential) analysis of deviance in which the treatment effect was added last.

Estimates of the treatment effect

The first question is whether the logistic models are able to correctly estimate the treatment effect underlying the simulated data (b.condition). For this comparison, b.condition was fixed at 1.6, meaning that participants in the treatment group would be roughly 5 times (4.9530324) more likely to provide a correct translation than those in the control group. The parameter b.covariate, i.e. the underlying slope parameter of linking the covariate to the outcome in log-odds space, varied between 0 and 4 (0, 0.5, 1, 1.5 etc.). The parameter sd.lat, i.e. the standard deviation of the unexplained variability in the latent ‘translation skill’ variable in log-odds space, also varied between 0 and 4 in the same fashion. 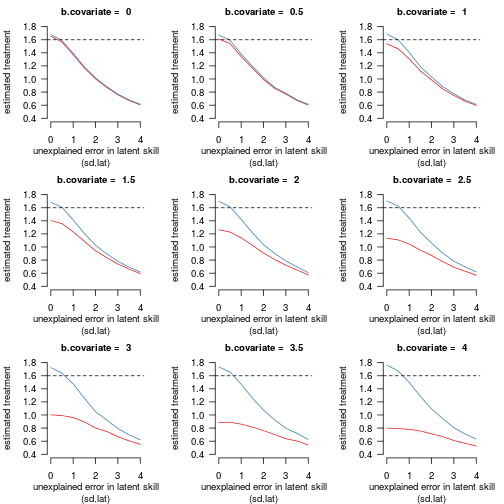 Figure 1 shows the models’ mean estimation of the treatment effect according to the strength of the relationship between the dependent variable and the covariate and the standard deviation of the residual variability in the latent skill. The underlying treatment effect was fixed at b.condition = 1.6 (dashed line). Red: the estimate for the logistic model without the covariate. Blue: the estimate for the logistic model with the covariate.

I noticed four things when looking at these graphs:

Standard errors of the treatment effect

Robinson and Jewell (1991) noted that adjusting for a covariate always decreases precision. To verify whether I’d understood this correctly, I computed the mean standard error of the treatment estimate for each set of 10.000 models. The results are shown in Figure 2: 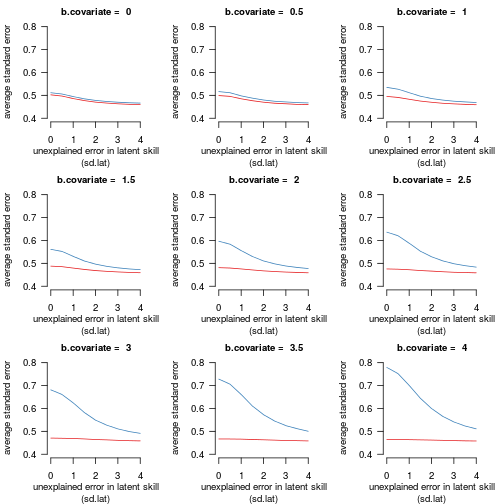 The obvious question is whether adjusting for covariates increases statistical power giving these two opposite forces.

For these simulations, I computed the proportion of the models that returned a significant (p < 0.05) treatment effect according to a Wald z-test and a χ²-test in a sequential analysis of deviance. The differences in power between the Wald z-test and the χ²-test were largely negligible, and only the power for the χ²-tests is reported.

Figure 3 shows how the study’s power varies as a function of the impact of the covariate and the underlying treatment effect: 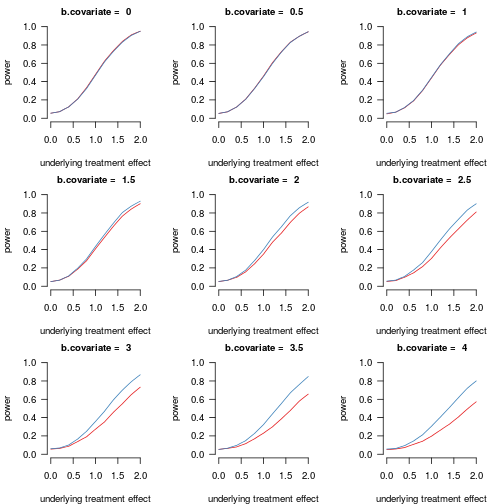 In terms of power, then, adjusting for a covariate in a logistic model doesn’t hurt. Whether the benefit of including a covariate in the analysis outweighs the effort to collect these data may be debatable when the relationship between the covariate and the outcome isn’t too strong, however.

Figure 4 shows how power varies according to unaccounted variability in the latent skill: 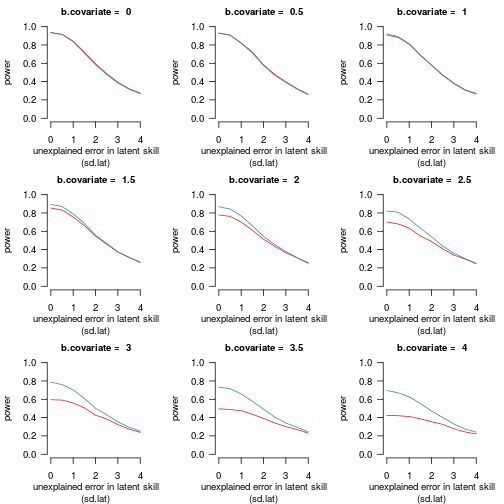 Figure 4 shows the models’ power for rejecting the null hypothesis of ‘no treatment’ according to the strength of the relationship between the dependent variable and the covariate and the standard deviation of the residual variability in the latent skill. The underlying treatment effect was fixed at b.condition = 1.6. Red: the estimate for the logistic model without the covariate. Blue: the estimate for the logistic model with the covariate.

All in all, covariate adjustment seems beneficial in terms of power and ‘accuracy’ (but not precision!) of the treatment effect in logistic models. That said, estimates of treatment effects seem bound to be underestimations when not all information relevant to the underlying data generating process can be brought under control, even in a randomized experiment. I don’t fully grasp the intuition behind these findings, but being aware of them is a first step.

Whether the effort of collecting a covariate so that it can be included in the model is worth it in terms of effort, time and cost would seem to depend on its potential to explain between-subjects differences that aren’t linked to the experimental condition.

Most of this was new and surprising to me, so I can’t guarantee that something hasn’t horribly gone wrong in my simulations. Please let me know if you spot an error! For a next post, I plan to take a look at covariate adjustment in logistic mixed-effects regression.

simulate.logistic generates one data point each for n participants. The probability of a success (in log-odds) is a function of the participants’ covariate scores (slope parameter: b.covariate), the condition to which they were randomly assigned (b.condition) as well as normally distributed unexplained factors (with a standard deviation of sd.lat). Two models are computed for this dataset with n observations: one without and one with a covariate. For each model, the estimated treatment effect, its standard error and two p-values are computed.

replicate.logistic takes the function simulate.logistic and runs it a large number of times (runs). It then returns the average slope and standard error for each modelling approach as well as their estimated power.

replicate.logistic is then run 10.000 times for a combination of b.covariate and b.condition values. For this simulation, n is fixed at 80 and sd.lat at 1. For this, I use the mcmapply() function in the parallel package:

These results can’t directly be saved as a csv file because the underlying structure is still a list. The solution is to ‘unlist’ each column, e.g.:

and then save the file: