When it comes to finding a powerful descriptive title for a research paper, it’s hard to top Gelman and Stern’s The difference between “significant” and “not significant” is not itself statistically significant. Yet, students and experienced researchers routinely draw substantial conclusions from effects being significant in one condition but not in the other.

Let’s say you recruit two groups – creatively named Group 1 and Group 2 – for an experiment. In a between-subjects design, half of the participants in each group are tested in a control condition (Condition A) and half in an experimental condition (Condition B). In Group 1, you observe what you’ve hoped for: a significant difference between Conditions A and B. In Group 2, however, the effect of Condition isn’t significant. Since you’re a creative researcher, your brain shifts into high gear and you can readily come up with a handful of interesting explanations as to why the effect can be observed in one group but not in the other. Perhaps the effect is moderated by the participants’ linguistic or cultural backgrounds, or perhaps the effect disappears in older participants?

But let’s pause for a moment. As Gelman & Stern’s title says, “the difference between ‘significant’ and ‘not significant’ is not itself statistically significant”. I take it that most researchers readily accept this when the p-values involved hover around the 0.05 threshold. For instance, with 25 observations, a correlation coefficient of 0.40 is statistically significant (p = 0.048), whereas a correlation coefficient of 0.39 isn’t (p = 0.061) – but it’s readily appreciated that the tiny difference between 0.39 and 0.40 probably isn’t meaningful. After all, 0.05 is an arbitrary threshold. But as Gelman & Stern explain with enviable clarity, even more dramatic differences aren’t necessarily significant either.

I think that researchers – both junior and more experienced ones – routinely read too much into comparisons of significance. To be more specific, I think they play the ‘moderator’ card too quickly and don’t truly consider the more prosaic alternative: chance. Obviously, the problem isn’t restricted to language-related research (see, e.g. Nieuwenhuis et al. 2011 on neuroscience). In this post, I discuss how to test whether the difference between a significant and a non-significant result really is significant for three types of tests: t-tests, correlation coefficients, and χ²-tests. 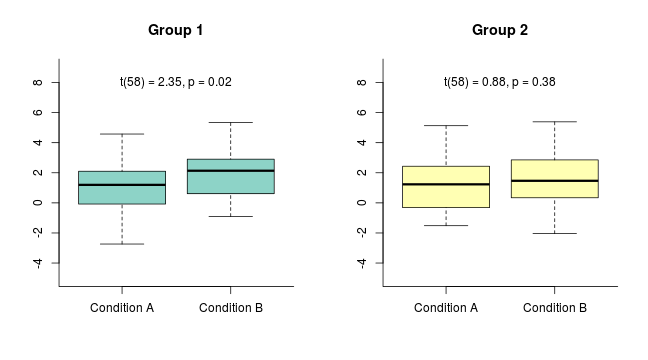 In this example, researchers familiar with ANOVA will probably recognise that we can’t jump to conclusions about moderator variables just yet: we need to establish whether the effect of Condition is significantly different in the two groups. In other words, we need to investigate the interaction between Condition and Group. The (fictitious) data for this example are stored in the dataframe df1, and the significance of the interaction term can easily be computed in R by running the anova command on a linear model with Group, Condition and their interaction as predictors.

In linguistic research, we’re often more interested in comparing the strength of the relationship between two (more or less) continuous variables measured in different samples (e.g. language learners at different levels; different language families etc.). In this kind of enterprise, substantial conclusions are often drawn on the basis of significant vs. non-significant correlation coefficients (i.e. r).

Example 2: We recruit two groups of 30 participants each (e.g. a group of French-speaking learners of German and a group of Dutch-speaking learners of German). All participants complete two tasks (e.g. an English vocabulary test and a German vocabulary test), and we want to establish whether performance on the two tasks is correlated in the two groups. 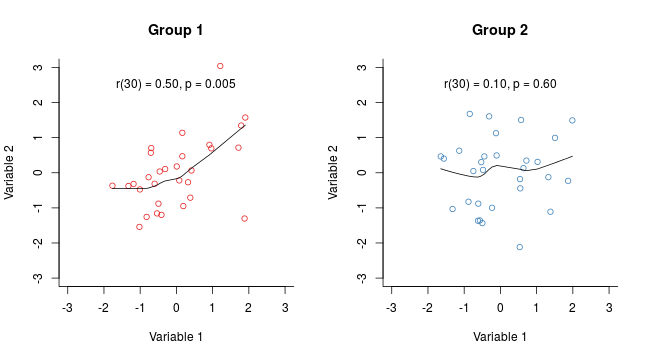 Even though thedifference between the correlation coefficients for both groups is quite large (r = 0.50 vs. 0.10), this difference isn’t itself statistically significant (z = 1.65, p = 0.10).

Example 3: Now imagine that rather than recruiting two groups of participants, we recruited just one group of 30 participants (e.g. Flemish learners of German). Each participant completes three tasks (e.g. an English, a French and a German vocabulary test), and we’re interested in comparing which of the two first tasks (English or French) is the better predictor of performance on the third task (German). 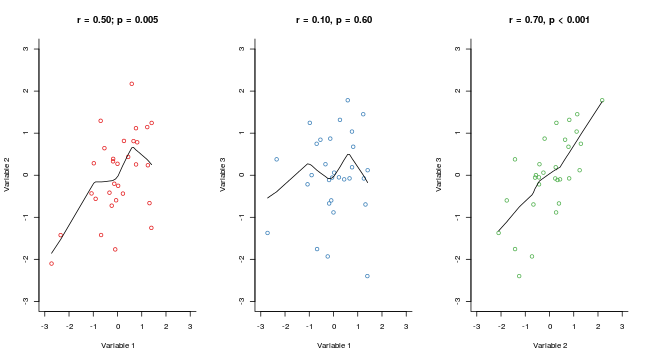 Incidentally, the above also applies when comparing the strength of the relationship between one indepedent variable and two dependent variables. In addition, the intercorrelation should be taken into account even if it isn’t significant.

Example 4: We recruit two groups of 120 participants each and randomly assign half of the participants in each group to Condition A and half to Condition B. We present each participant with a dilemma, to which they must answer by either “yes” or “no”. 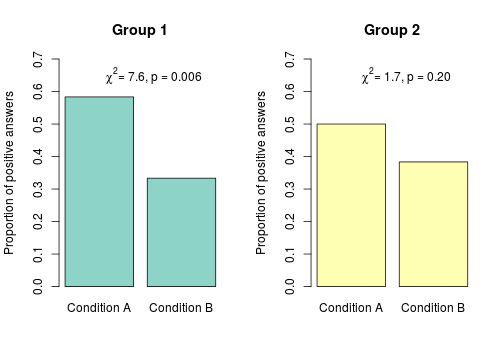 As in the examples above, it would be premature to start looking for moderator variables just yet. What we need to investigate is the interaction between Condition and Group. To that end, let’s first reconstruct the summary table with the number of positive and negative answers per Condition per Group (this, incidentally, can often be done even if you don’t have access to the raw data):

We have all the information we need to compute the significance of the interaction: we can combine the columns with the positive and negative responses and feed it to a logistic regression model as the dependent variable; the independent variables are Condition and Group, which are allowed to interact with one another. (Sociolinguists already know a form of logistic regression (complemented with stepwise variable selection) as ‘variable rules analysis’ or Varbrul.) We first construct the model (a logistic/binomial generalized linear model, hence glm()), and then compute an analysis of deviance table for the three terms in the model (two main effects and the interaction). (Analysis of deviance is like ANOVA but for generalized models; here, we ask R to compute χ²-tests.)

Most quantitatively-oriented researchers are familiar with investigating interaction effects when comparing mean differences. For the same reason that we’re not content with computing two t-tests and comparing their p-values, comparing the p-values associated with correlation coefficients or χ²-tests doesn’t suffice. It’s questionable to draw strong conclusions merely on the basis of an effect being significant in one condition/group/study and not in the other – even when the p-values differ substantially.